The race for the wrist has settled into a larger-than-niche and less-than-majority position. Over the last three years, the share of online Americans using at least one smartwatch has grown from one in six to one in five, only to settle back to the one in six level. This is based on TUP/Technology User Profile 2019 survey of 8,060 online adults in the US, and from the prior three annual waves.

Worse yet for both fitness bands and smartwatches – it’s not as if each are cannibalizing the other. Use of either type of device is also down, dropping from a high of 33% in 2016 to 27% in 2019.
The market has tapered even while smartwatch makers continue to add capabilities well beyond timekeeping and step-counting. Also, it’s happening even as watch-wearers begin to actively use the new capabilities – broadening their use of smartwatches to more activities. Some of the top smartwatch activities include seeing who’s calling before taking a call through or on their smartwatch, recording their heart rates, checking current weather, or using their smartwatch in a store to check products or prices. Convenience is at hand. 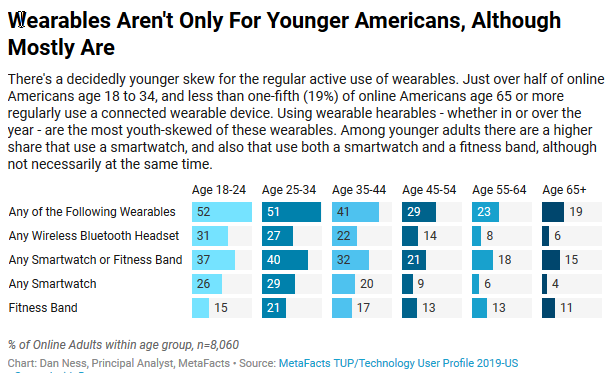 Just over half of online Americans age 18 to 34 use at least one Bluetooth headset, smartwatch, or fitness band. In stark contrast, just less than one in five (19%) online Americans age 65 or higher use any of these wearables. Among this set, fitness bands have the highest penetration, on the wrists of one in nine (11%).
Hearables are an important category to track. In addition to sales by watchmakers, beneficiaries include digital media services (specifically music), cellular carriers, and the full ecosystem of e-wallet payments and retailers. END_OF_DOCUMENT_TOKEN_TO_BE_REPLACED