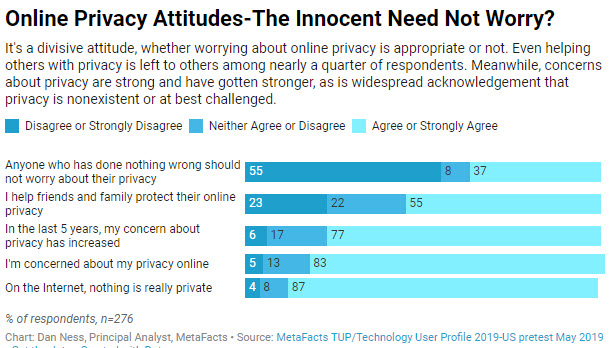 Most Americans value their privacy, although many have resigned themselves to having less, while others are taking steps to better safeguard theirs. Are privacy concerns a factor affecting the behavior or everyday Americans? Do attitudes and beliefs around privacy affect technology usage? Do Americans trust some brands more than others? How widely held is a need for online privacy?

To address these questions, we conducted a short survey among online Americans in May 2019 as part of the preparation for TUP/Technology User Profile 2019.

Our research results show that many online Americans are willing to live with inner conflict, finding a balance between their fears and their quest for convenience. Even those feeling strongly are still using systems they distrust.

The Innocent Need Not Worry – Agree?

An idea that’s been mentioned around privacy debates for more than 100 years goes something like: “why do you need privacy if you’ve done nothing wrong?” We asked respondents how strongly they agree or disagree. Their responses reveal a strong split among online Americans – more than any other question we asked in this survey. Nearly half (55%) disagreed or strongly disagreed that “Anyone who has done nothing wrong not worry about their privacy”. A smaller yet substantial number (37%) disagreed. There’s widespread and growing concern about online privacy, along with acceptance that online, nothing is really private.

The strength of belief in “nothing to hide” exposes a wide split among online Americans in usage rates of certain technology: namely home security cameras and voice assistants. Among the “Innocent need not worry”, the use of home security cameras (such as from Arlo) are being used at more than three times the rate than among the “Innocent should worry.” There have been many widely reported breaches of cloud-stored images, especially among some of the earliest cloud camera implementations. 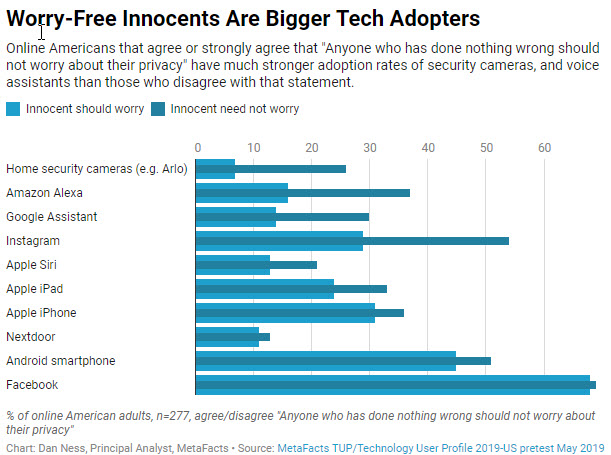 The use of or avoidance of voice assistants is also split by attitude, with usage rates being roughly twice as high among the “Innocent need not worry” versus the “Innocent should worry”. As with breached cameras, there have been mainstream reports about voice recordings or listening devices being compromised.

Usage rates of iPhones and Android smartphones is not markedly different between these groups, nor is the use of social networks Nextdoor or Facebook. However, iPad usage is higher among the “Innocent need not worry”.

A bigger issue facing Facebook is that of trust, or more accurately, lack of trust. Americans trust Facebook least of all among Google, Apple, Amazon, and Microsoft. Within the last several years, everyday consumers have been alerted to a series of privacy breaches in news reports in mainstream news. Although tech-oriented users have been cognizant of the inherent threats to privacy from their online activities, these concerns have broadened into the general public. Just over one-fourth (27%) of online Americans distrust Facebook while 23% similarly distrust Google, saying they trust them “Not at all” or “To little extent”. And, only slightly more than one-third (36%) say they do trust Facebook, in strong contrast to the majority who report trust of Google, Apple, Amazon, and Microsoft. 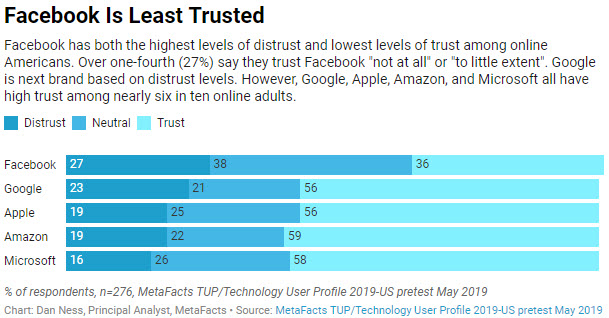 There are many in technology and marketing circles who dismiss privacy concerns, pointing out that although many people express concerns, they then paradoxically go ahead to use or buy that which they distrust, despite their awareness and fears. That display of cognitive dissonance is clearest among users of Facebook’s properties. Of those who use Facebook, Instagram or, WhatsApp, only 39% say they trust Facebook. That’s half the trust rate among Apple’s users, where over three-fourths (77%) express trust. 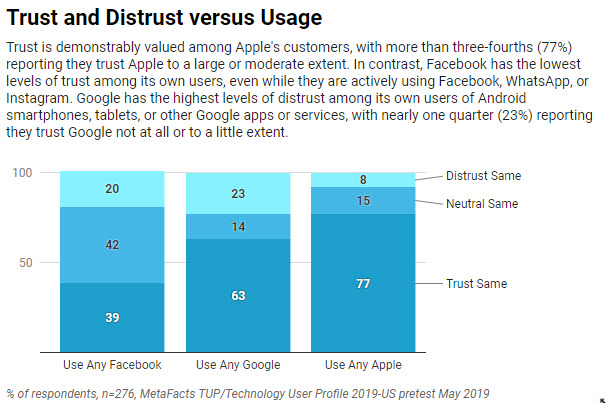 Within the last year, Apple has increased its marketing around privacy. Apple’s current customers are already more privacy-oriented than the average online American. A higher share describe themselves as being more careful about their privacy than most people, and noting that they’ve been taken advantage of often. This predisposes them to be more receptive to privacy as a reason to choose Apple’s products and services over others. 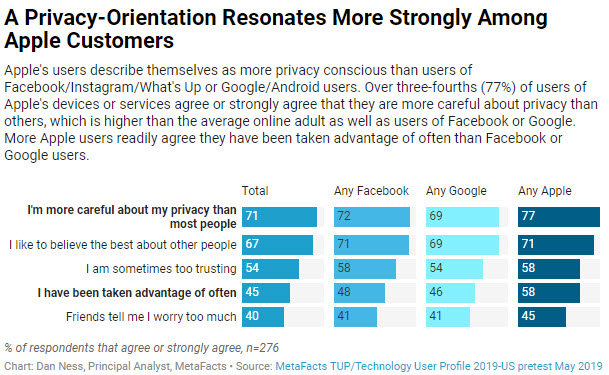 As a marketing issue, online privacy is likely to continue getting stronger and more widespread. Most likely the word privacy will be defined and redefined in many different ways by each entity, leading to further market confusion. Apple’s privacy-oriented and aware customers are likely to continue as such, solidifying their reliance on Apple. In contrast, non-Apple customers will be less and less likely to switch to Apple as they’re mollified by promises of privacy from Google, Facebook, and others. The perceptual gap around privacy issues will be further eroded by claims. Meanwhile, as adoption of voice assistant and smart home devices expands, we can expect continued reports of data breaches and privacy failures. Realistically, these privacy events are unlikely to discourage users from using their existing services to any large degree. Convenience, habit, denial, and acceptance (aka resignation) are strong forces among online Americans. In other words, we can expect more of the same.

We’re going to see a rising challenge to offer convenience while truly managing privacy. Makers of products with capabilities that everyday users may associate with privacy risks – such as those with integrated voice assistants or cloud cameras – will need to be aware of the market’s needs for privacy, and likely offer alternate versions without these capabilities. Or, makers of these products will need to offer settings that will assure privacy, such as ways for nontechnical users to confirm sensors such as microphones or cameras are inoperable. Even products that track personal information in ways less obvious to regular consumers – such as tracking multiple factors such as location, device ID (such as MAC address), viewing habits, or other behaviors – will need to address privacy beyond the usual license agreement. I expect we’ll see alternate “privacy” versions of smart home products from wireless speakers to TVs and thermostats that are designed to have limited or no tracking.

At the end of the day, privacy will continue as an important product feature, added to the list of speeds, feeds, and checklists that consumers will use as they choose what they buy or avoid.

The analysis in this TUPdate is based on results drawn from the most-recent wave of TUP (Technology User Profile), the 2018 edition which is TUP’s 36th continuous wave. This survey-based study details the use of technology products by a carefully-selected and weighted set of respondents drawn to represent online adults. This specific wave spanned the US, UK, Germany, India, and China. In the TUP survey, we identified the connected devices being actively used, from those acquired with home/personal funds to those that are owned by employers, schools, or others. From these, we selected adults who are using at least one home PC.