Meanwhile, web searches are the major subject users speak with their Voice Assistants about. This subject is dominated by Google Assistant, and closely seconded by Microsoft Cortana.

Alexa is ranked #1 in the breadth of subjects actively used, and is primarily used for weather, music, and entertainment. Unsurprisingly, perhaps, Alexa is more-favored for shopping than other systems. What may be surprising is that shopping isn’t Alexa’s top helpful task. Since most connected shopping today is visual, most involves the use of a larger screen device such as a PC or Tablet.

3rd-ranked Apple Siri is used primarily for web searches, weather, and navigation, and is uniquely strong in messaging.

This is based on the MetaFacts Voice User Profile survey conducted in February 2018. This subset of the results report on active usage, which is a practical measure to contrast with the potential of what Voice Assistants may or may be able to do.

The market for Voice Assistants is in a time of flux and rapid development, as each Voice Assistant system touts the breadth of its skills, richness of their vocabulary, accuracy, humor, or other capabilities. Meanwhile, users are experimenting, with some former users having been discouraged by unmet expectations and others only at the start of their adoption.

How many connected adults use hearables? (MetaFAQs)

For ears, it’s an exciting time in the tech industry.

Hearable technology – audio-oriented wearables spanning wireless Bluetooth headsets to VR headsets – have received a fresh round of media attention. This has stemmed from substantial recent investment in new ventures such as Oculus VR along with a wider range of product releases.

Currently, one in eight US connected adults are regularly using a hearable device – either a wireless Bluetooth headset or VR headsets. This level of use is broad enough to represent great potential opportunity, yet not broad enough to sustain many competitors.

The primary current use case for Bluetooth headsets are for phone calls, as has been the case for more than a decade. Apple is leading the charge to change this with their Airpods tightly integrated with iPhones, in a bid to help popularize voice-controlled usage. 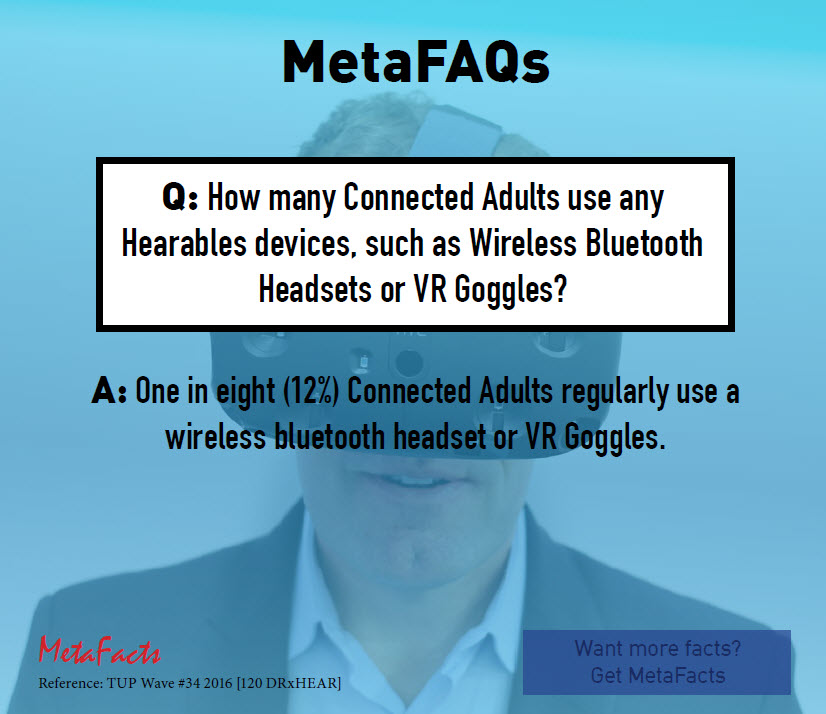 Voice assistants such as Apple’s Siri, Amazon’s Alexa, Microsoft Cortana, and Google Now promise to radically shift how users interact with their technology.

Many other related answers are part of the full TUP service, available to paid subscribers. The TUP chapters with the most information about activities is the TUP 2016 Wearables, Hearables, Listening, and Speaking Chapter. This details which market segments are (and aren’t) using hearables, listening to music, using music streaming services, making phone calls, playing games, using voice control, and other audio-oriented products and activities.