Home PCs enjoy a longer life than in the hands of their original owners, as many are ultimately enjoyed by someone else. This is more strongly true in developed countries than in developing ones.

For each of the last five years, one in 9 home PCs in the U.S. active installed base were used/refurbished home PCs. In the UK and Germany, the rate has been similar. In three major developing countries – China, India, and Brazil – the rate is much lower. This is based on the most recent five waves of MetaFacts TUP/Technology User Profile, from 2015 through 2019, developed through surveys of 11,625 respondents in 2019 and similar sample sizes in other waves. 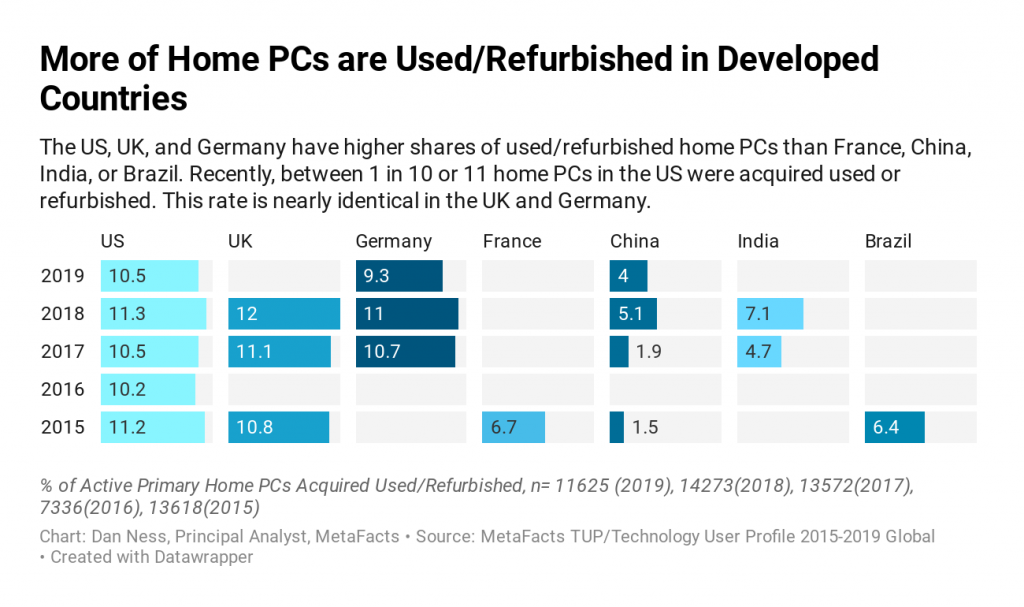 Home PCs aren’t the only used/refurbished tech devices in active use. Across the US, China, and especially Germany, basic cell phones/feature phones have a high share acquired from a prior user. At a similar rate to home PCs, 11% of US basic cell phones in active use are used/refurbished. In Germany, this rate is one in six, the highest rate among these countries. The lower rate (8%) in China can be attributed in part to the more recent adoption of smartphones as a user’s first mobile phone, so there are fewer feature phones available for reuse. 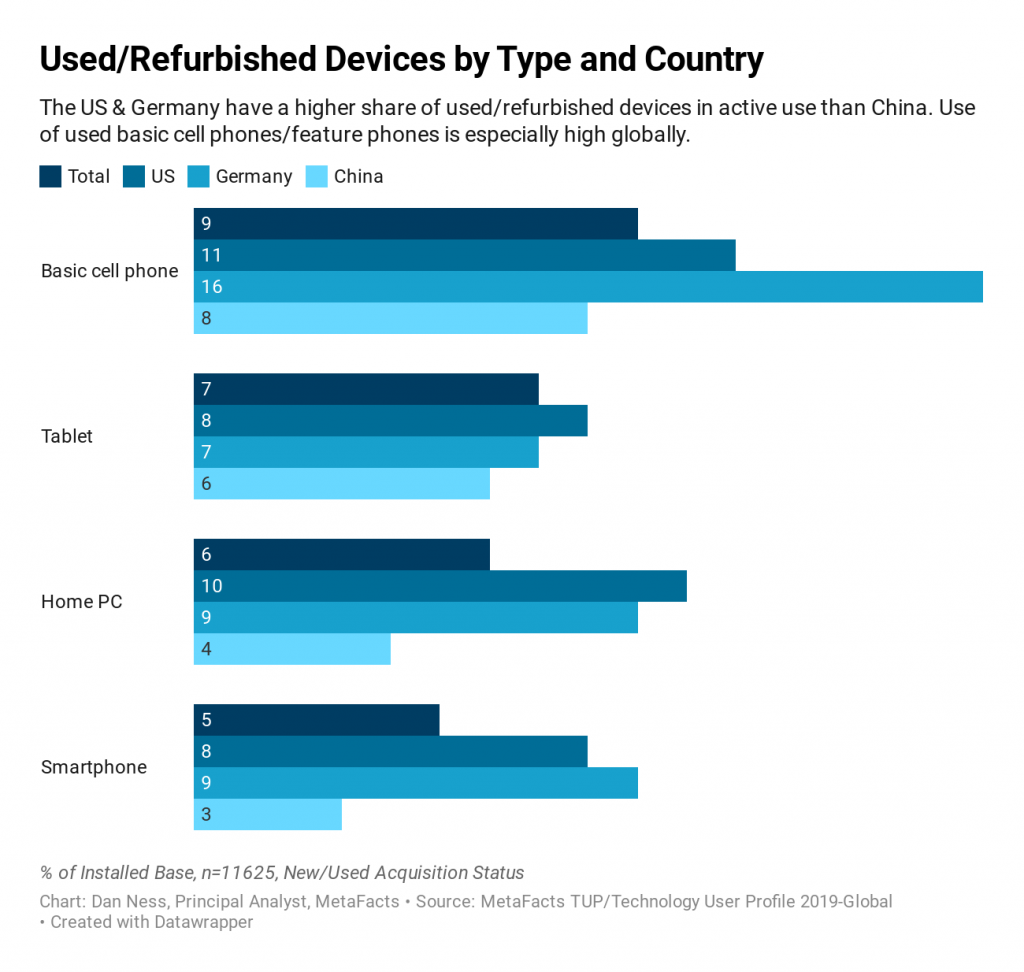 Compared to home PCs, tablets have a lower rate of being used/refurbished. For Android tablets, one issue has reduced longevity – newer operating system versions and older versions and devices not being supported for long. Some tablet manufacturers have maintained a short service life, making used Android tablets less useful to a potential new owner. Apple has taken a different approach, extending the life of older iPads with an operating system that spans a wide range. Even with the latest version, iOS 13, released in 2019, Apple released a new fork for iPads named iPadOS which is backward compatible through earlier iPads such as iPad Air 2 (released in 2014).

Smartphones have lower reuse rates than home PCs, tablets, or basic feature phones. This is due to several factors. From the customer demand perspective, many smartphone users crave newer models, as manufacturers continue to innovate and entice customers to upgrade. Also, as carriers continue to update their networks, some older equipment is retired or deprecated, making affected mobile phones less useful.

Who uses the used? 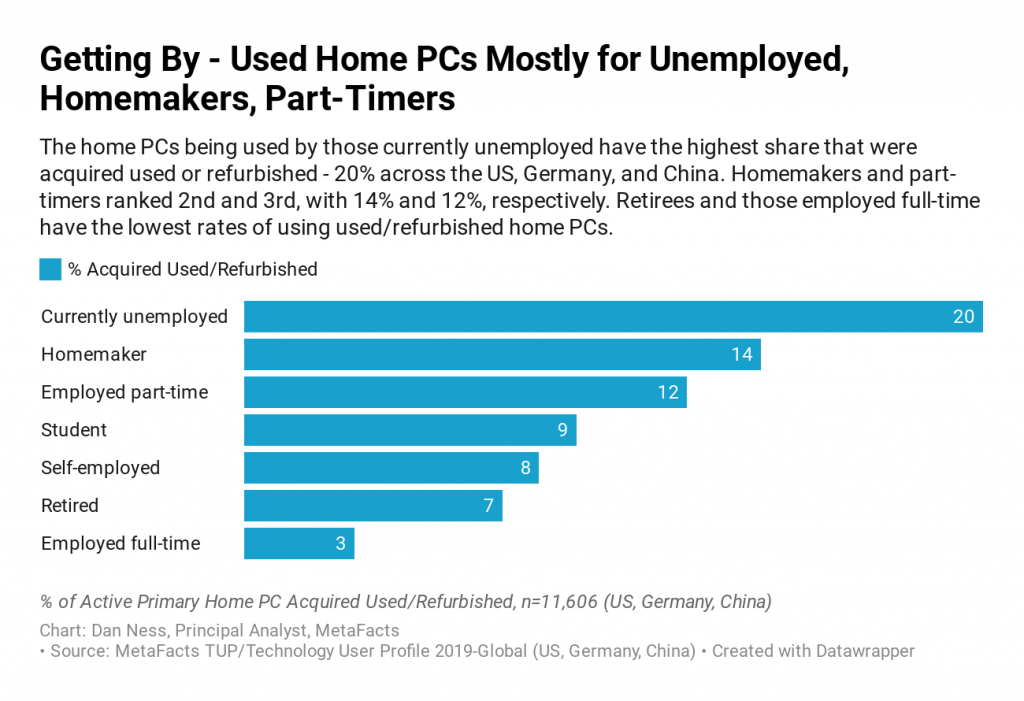 Whose Home PCs lasts the longest?

The use of used/refurbished home PCs appears to be more related to country and culture than to the specific brand.

Dell has the highest rate of used/refurbished home PCs actively used by American adults, representing 12% of the Dell home installed base. Acer’s rate closely follows with 11%, and HP’s and Lenovo’s rates are 10%. In Germany, Dell also ranks highest, matching Lenovo, each with 14%. In China, the overall reuse rates do not vary strongly by brand. 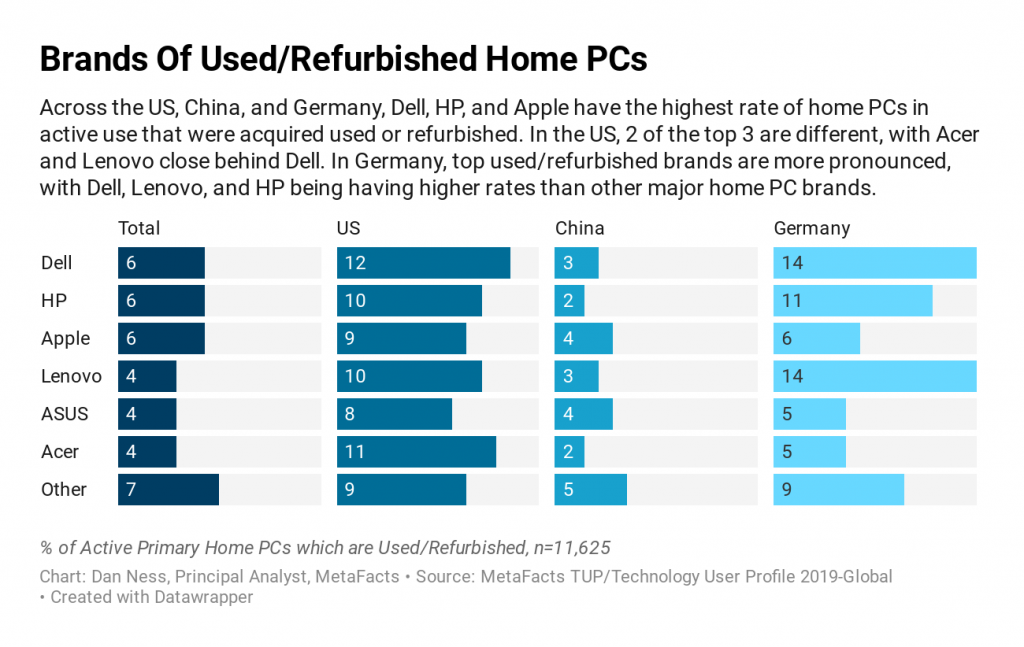 It’s unlikely we’ll see major changes in the way PC makers offer refurbished home PCs. For most manufactures, programs have been in place for years mostly to manage overstock and asset recovery of returned PCs, and less to spur demand among consumers for more used/refurbished home PCs. Apple is exceptional, in that it offers trade-in value for a wide range of their products, from iPhones and iPads to Macs. This is a prominent part of their positioning as being an environmentally aware technology maker.

Consumer demand is unlikely to change quickly. Consumers will continue to find a new home for their home PCs as they buy additional ones, either within their own families, neighborhoods, or friends.