The Favorite Collections
Users vote with their fingers, demonstrating what they like by what they use. The top combination includes two devices – a notebook and smartphone and no desktop or tablet – and is actively used by nearly one in seven (14%) online adults in the US.

Is Less More?
Is it Marie Kondo’s influence, as Americans move to tidy up their choice of connected devices to only those that give them joy? It’s not that simple or dramatic. On the one hand, tablets haven’t substantially grown in market penetration. On the other hand, no single device type has satisfied the wide range of activities users do. Americans are continuing to experiment with their device choices. They are also becoming increasingly fluent about doing what they want to do across the devices in their collections. 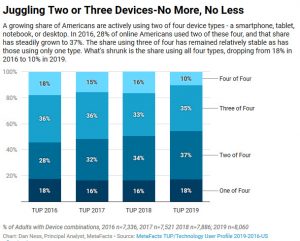 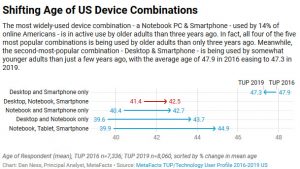 Despite much media attention on some single winner-take-all device taking over, most American users continue to juggle multiple devices.

Although innovative crossover products continue to make media splashes and inroads, from foldable phones to all-in-one and convertibles, most users persist in finding ways to stay productive and entertained with their varied types of devices.

Consequently, in addition to new devices needing to stand on their own merits, it’s important to consider how devices interact with each other. How well can users start something on one device and then pick up on it on another? This is broader than a device or feature focus and relies instead on the interoperability of operating systems, apps, and the connecting infrastructure such as in clouds. The future will thrive with interoperability, not only in the background of connected data, but also in the foreground of easy user experiences.