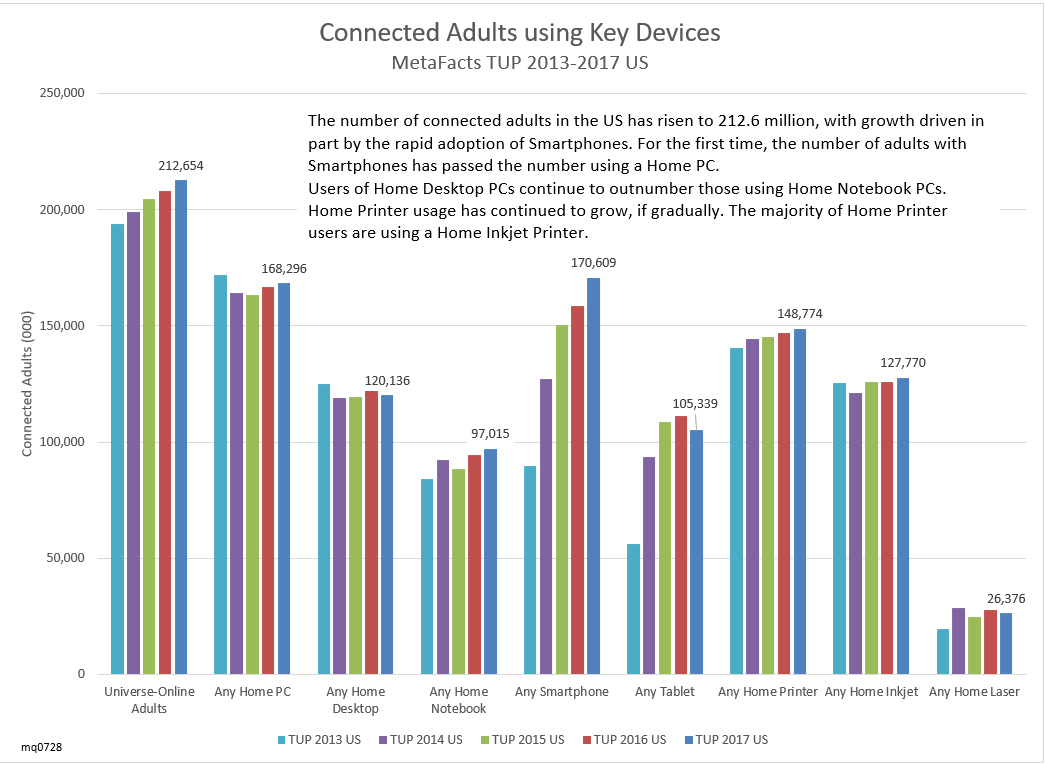 The number of connected adults continues to rise in the US. Based on our Technology User Profile (TUP) 2017 wave, there are 212.6 million adults who regularly connect to the Internet using a PC, Mobile Phone, Tablet, or Game Console. This number is up 18.9 million from the 193.8 million adults we reported in our TUP 2013 wave.

While some of the increase has come from a growing adult population, the share of adults actively connected has also grown, due in large part to the increasing use of Smartphones.

The use of Tablets such as Apple’s iPad has also expanded since 2013, although declined somewhat in 2017.

Home PC usage has remained relatively stable, having appeared to be on the decline after 2013, only to regain again slightly. In part, this return was supported as buyers picked up new All-in-One and Gaming PC designs. Also, many online shoppers are still preferring their larger-screen PCs or Tablets over their Smartphones.

Use of Home Printers continues to have steady, if modest, growth. The percent of Home PC users with Home Printers has rebounded from 82% in 2013 to 88% in 2017. Home inkjets continue to be the user’s printer of choice. 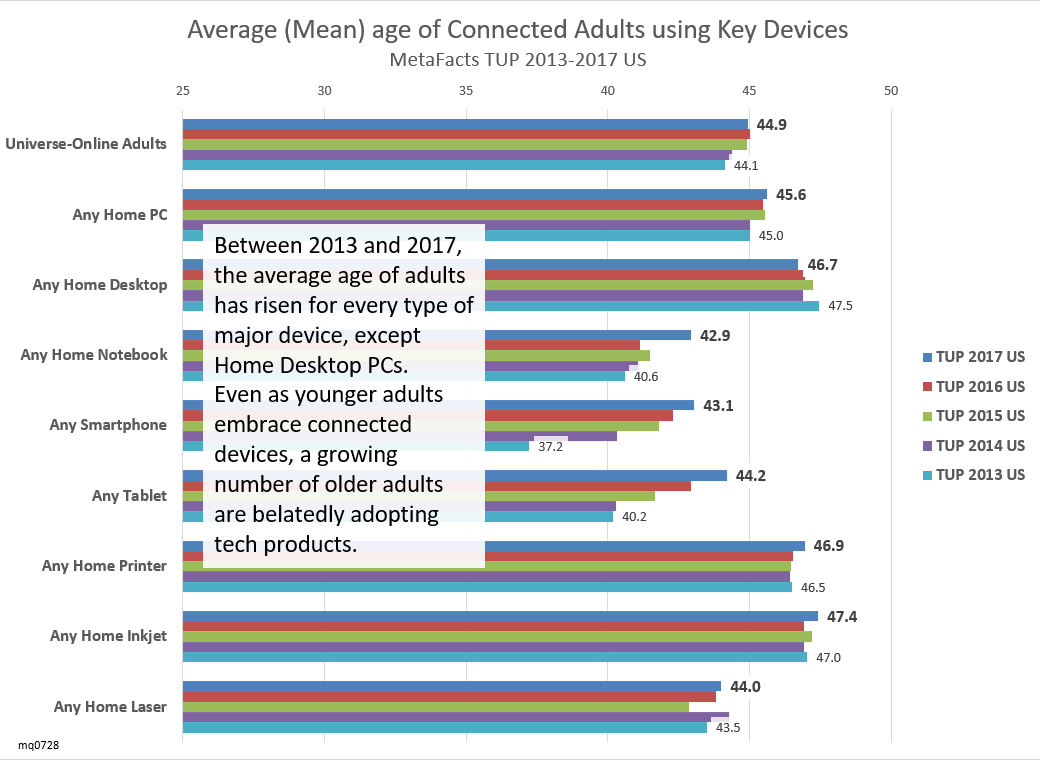 Home Desktops continue to be used by older adults than users of Notebooks, Smartphones or Tablets, although the average age has declined somewhat.

Digging deeper, we looked at the shifts in usage rates for key devices among parents. Adults with children are the biggest spenders on technology devices and services, as we’ve reported in other findings we’ve released from MetaFacts TUP.

Smartphone usage has grown strongly between 2013 and 2017, although is appearing to be leveling off to be just slightly higher than the current level. At 87% of adults with children, Smartphones are ahead of Home PCs. The use of Home PCs by parents has dropped somewhat from 85% in 2013 to 78% in 2017. Home printer use remained a steady 70%-71% among parents. 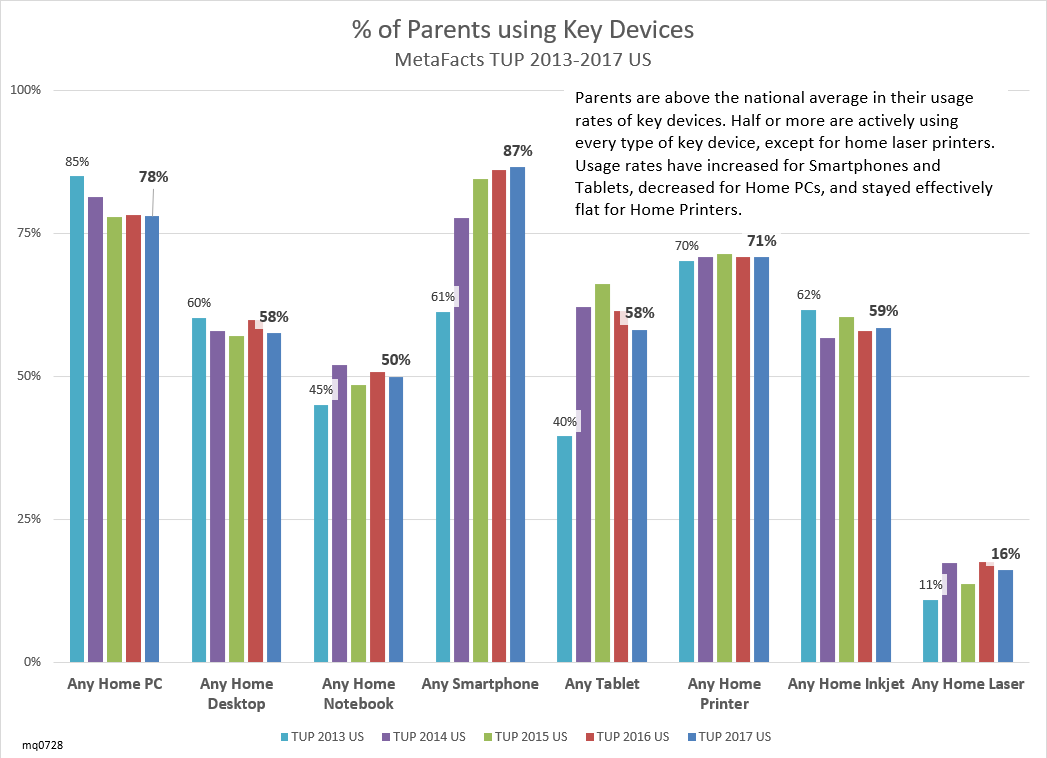 Adults with children make up 37% of Connected Adults in 2017, higher than the rate in 2013, which was 32%. In addition to being a sizable segment of the market by numbers, as we’ve reported elsewhere in TUP, they spend much more than the average adult on technology devices and services. 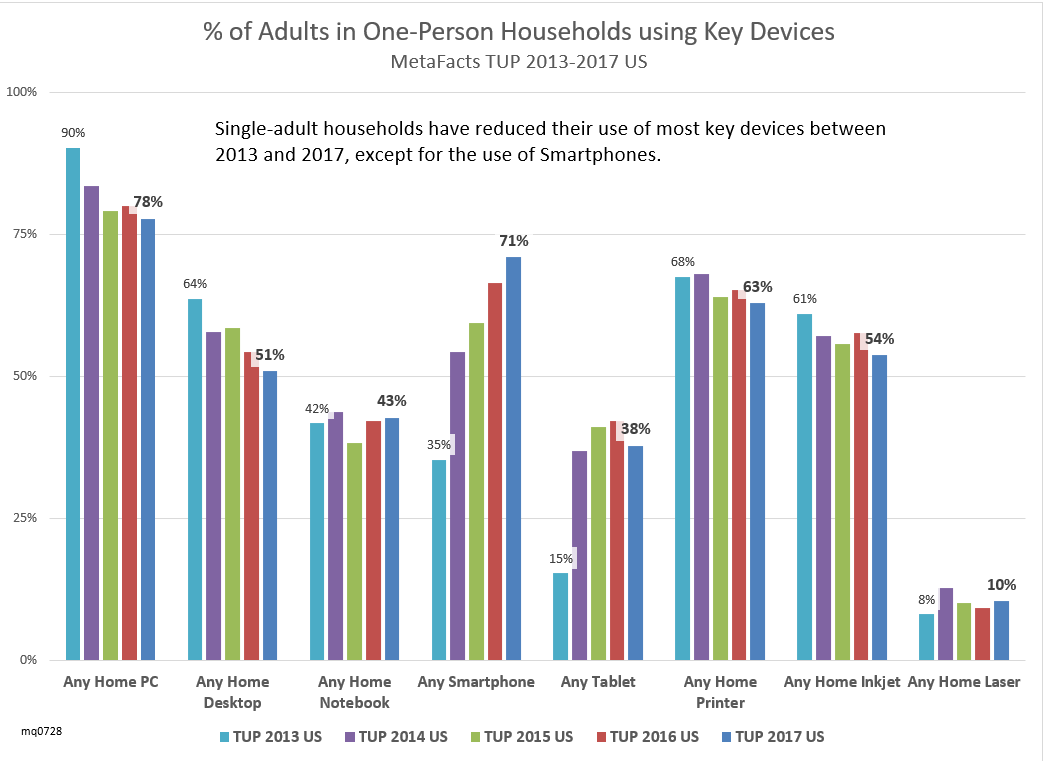 The trend is continuing with a multi-device experience for many years to come. Although Tablets appeared to be emerging as a third device, most users actively use both a mobile phone and PC. While Smartphones are growing in use, they aren’t fully replacing PCs or Tablets for most of user’s activities. Although consumers continue to explore and experiment with ways to enjoy what they have, changes in behavior can come slowly. The inertia of consumers is a major factor.