How Do (They) Love Thee? Follow Their Brand Footprints

“How Do I Love Thee? Let me count the ways.” So begins the 43rd of Elizabeth Browning’s Sonnets from the Portuguese. After more than 160 years, this poetry still inspires.
This classic poem seems fitting for a research-based understanding of customer loyalty and, well, mutual loyalty and love. One might hope that love and loyalty would flow in both directions – between customers and company – and in turn would result in more delighted customers, better products and services, and more customers actively using more of a brand’s offerings. In addition to brand footprint measures such as market size and intensity, MetaFacts measures the shape, loyalty, and quality of technology users.

Apple’s Intensity Up and To the Right 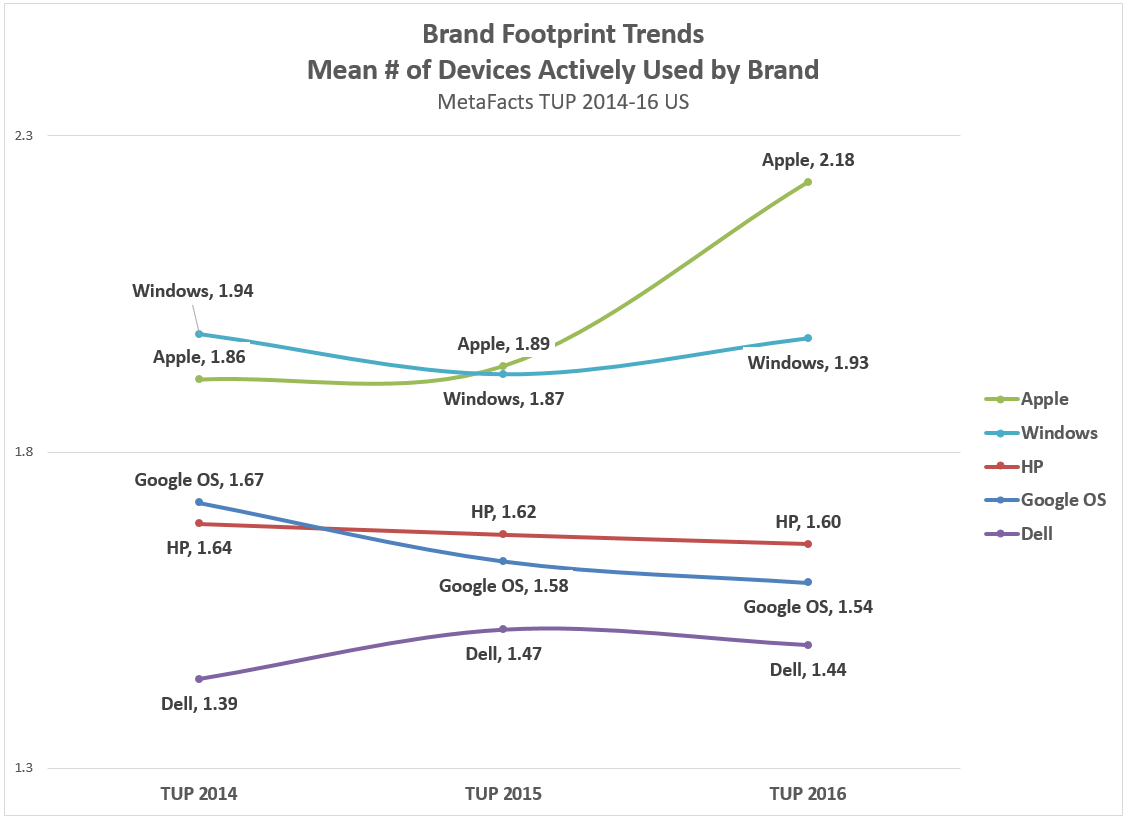 Apple’s customers now rank highest in average number of Apple devices, an elemental measure of brand footprint, reflecting in part the intensity of customer’s involvement. When customers use more than one of a brand’s offerings, it reflects the value customers see and their depth of customer loyalty. Based on our most recent wave of Technology User Profile (TUP), Apple’s customers are actively using an average of 2.18 devices, spanning Macs, iPhones, iPads, an Apple TV box, Apple Watch, or some combination. Only one year earlier, our TUP 2015 wave reported that Apple’s device average was effectively on par with the footprint of Microsoft Windows devices.
Between 2014 and 2016, HP and Google Android/Chrome OS devices have seen their customer’s active device averages erode as Apple’s has gained. This is due in part to consumers abandoning older Google Android Tablets. Dell’s average rose slightly in 2015, only to sag slightly by 2016. 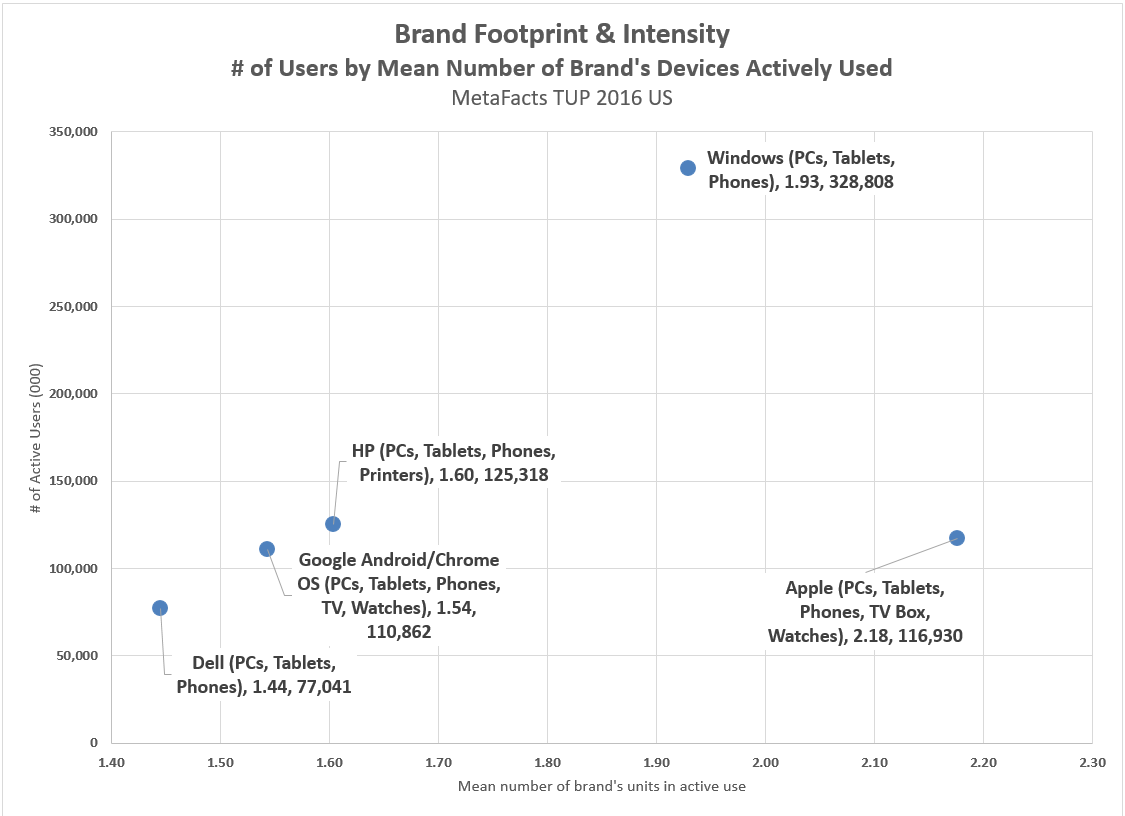 Breadth of usage, or market penetration, is another dimension of brand footprint. Coupled with intensity – as expressed by the average number of actively-used devices – a more complete view is clearer.

In market breadth and intensity, Windows devices are head and shoulders above other brands. Windows is in the upper-right quadrant for both measures. The long-time established brand continues to have the largest number of active users and above-average mean number of actively-used devices.
Apple stands out for having a market penetration on par with tech majors HP, Google, and Dell, yet with a strongly higher usage intensity. Their fewer, if mightier, customers have more Apple products than any other platform. In a quadrant to themselves, Apple’s expansion in active usage sets the stage for additional expanded offerings to their loyal customers, ranging from devices to subscription services. 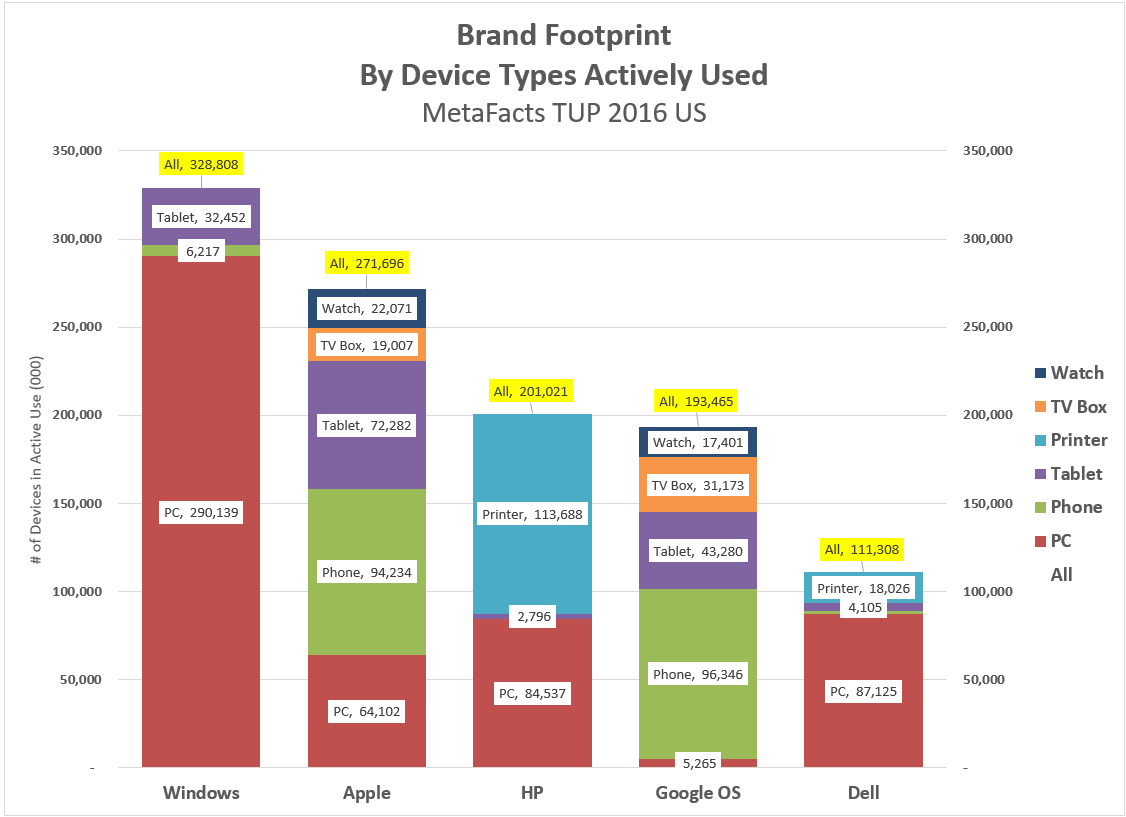 The Apple brand has, for most of its history, been a specialized brand, purposely positioned as “different”. This skimming strategy has been well-supported by Apple’s focus on proprietary integration over standards managed by others. Apple’s current brand footprint robust when looking at the total number of devices in use as well as the balance of products in its actively-used mix. Google’s Android/Chrome mix is similarly broad, yet is smaller. Among US technology users, Google is playing a me-too catchup game to Apple’s broadly balanced acceptance.

HP’s and Dell’s brand footprints are composed of two product types, demonstrating what might be alternatively called a disciplined focus or a lack of diverse breadth. HP’s persistent dominance in Printers is unrivaled by Dell, or competitors Epson, Canon, or Brother. Dell’s footprint in PCs is only slightly larger than HP’s.
The strength of the Windows brand footprint is based on PCs. Only recently have Windows Tablets started making their mark, and promise to continue to challenge Apple’s dominant iPad and Google’s 2nd-ranked Tablets . Windows Smartphones are on the way out, with a usage base declining in the face of Apple iOS and Android.
HP solidly dominates Printer usage. While years ago Dell challenged HP when it entered the printer business, Dell’s current brand footprint is puny in comparison. HP’s PC business, while nearly equal to Dell’s, is similarly being challenged by Apple’s broadening usage.
Apple’s entire brand footprint is benefitting from recent acceptance of two newish categories – smart watches and TV boxes. Although Google is on par with Apple in these categories, collectively these products are expanding Apple’s footprint into users they otherwise haven’t reached.

It takes much more than a brand halo to convert fickle customers into loyal ones. Much effort goes into the design, manufacturing, distribution, promotion, and integration of products and services.
While Apple and Google are working hard to further their OS against Windows, smoother integration can attract and hold customers longer than an OS alone. Presently, Apple’s MacOS and iOS aren’t fully compatible, a difference which may become more important to the growing number of Apple customers actively using both iPads and Macs. Google’s Android and Chrome OS offerings face a similar conundrum, with even less OS consistency due to the many versions in active use.
Beyond OS ecosystems, technology companies are also seeking other ways of winning groups of customers. Google, Amazon, and Microsoft and joining Apple in racing to be the user’s choice for a voice assisted experience. Amazon’s recent release of Alexa on iOS is Amazon’s bid to establish dominance among voice assistants, and helping to support not only Amazon’s shopping footprint, but also their many other gateway products such as the Amazon Echo or Dot.
Pragmatically speaking, what matters is having customers and that they use many of a brand’s products and services. Measuring brand footprint by penetration and intensity are suitable metrics to measure market success both in size and quality. These metrics may be better than waiting for customers to compose love poems of “the depth and breadth and height” of their ardor for the brand.

Current TUP subscribers can tap into any of the following TUP information used for this analysis or for even deeper analysis.
This TUPdate was based on results in the TUP Chapter – Devices, Section FOOT/Brand Footprint and Section DEV_ECO/Device Ecosystems from TUP 2014, TUP 2015, and TUP 2016. Other related results include Section VOICEASST – Voice Assistant in TUP 2016 Chapter – Wearables, Hearables, Listening and Speaking.

The following related MetaFAQs address questions included in this TUPdate.