Primacy. The first device you reach for, the one you stay near, the one you rely on. You might think that it’s the Smartphone, and that’s correct for many, but not all. For many activities and market segments, PCs and tablets dominate. A user’s activity focus affects which devices they choose most often, as does their operating system collection, among other factors.

All-Apple and all-Windows users are living in different worlds – as they have strikingly different preferences for their primary devices.
Among Apple-only users, Smartphones are the primary device for most types of activities. The PC (Mac or MacBook in this case) is their primary device for cloud storage/sharing and for search and information-related activities. Half (50%) of these adults using only Apple iOS or MacOS devices (no Microsoft Windows or Google Android or ChromeOS) do most of their cloud storage/sharing activities on a PC, and just under one-third (32%) primarily use a Smartphone.

In contrast, among Windows-only users, the PC is strongly the primary device for every major type of activity. Smartphones are only ranked second for productivity/personal and graphics/images activities. A tablet is the second choice for the greatest number of activity types – cloud storage/sharing, search/information, shopping, and social networking.

Apple’s iPad doesn’t rank as a second device for any type of activity among Apple-only users. This low level of primacy may seem surprising given that penetration of iPads is higher than average among this Apple-loyal segment. Sixty-one percent of Apple-only users regularly use an Apple iPad, more than double the national rate of 29%. This primacy analysis doesn’t mean Apple-only users aren’t enjoying their iPads – simply that they’re lower on the list of devices they choose for a wide range of activities. 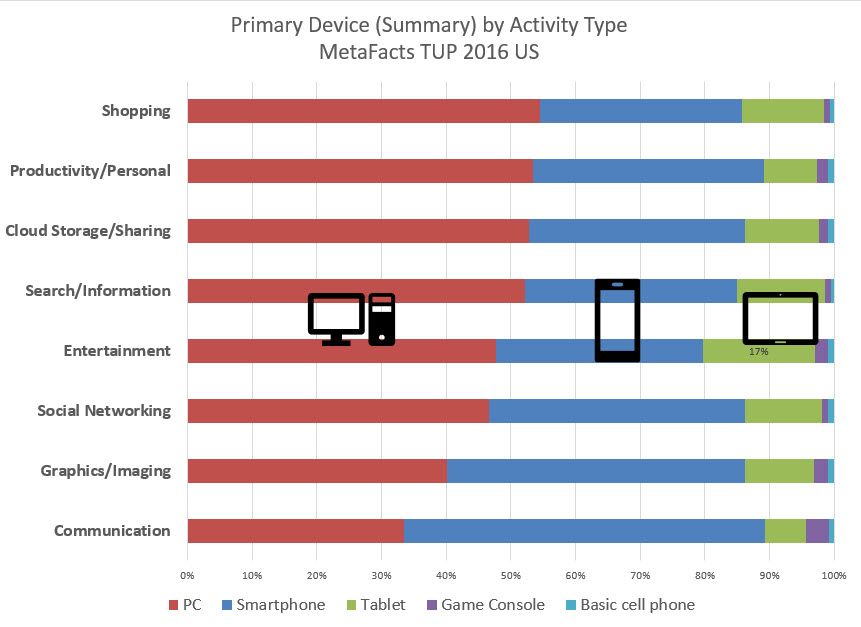 Across the entire base of connected adults, the PC is the leader for nearly every type of activity. The Swiss Army Knife broad nature of PCs continues its appeal. Smartphones only lead PCs for communications and graphics/imaging activities. Many of the specific activities in these two categories are strongly mobile – making phone calls, staying in touch, and taking and sharing photos.

Connected Devices are dominated by three operating systems families – Microsoft Windows, Apple’s MacOS and iOS, and Google’s Android and Chrome OS. The base of Windows, once exclusively dominant, is well-overlapped by Apple and Google. The majority of users are living a multi-OS lifestyle, juggling more than OS family. The two largest OS combinations are nearly equal in market size. Just over one-fourth (26%) of users use connected devices running Windows and Google, and none with an Apple OS. Another fourth (25%) have Windows and Apple devices, with none as Google.

It might be assumed that Apple-only users are early adopters while Windows-only users are laggards, partly explaining why they might choose different devices as primary or secondary. This is only partly true. The Windows-only users do include many tech laggards and the late majority, with 38% being the last of their age group to have first used a PC, mobile phone, or tablet. However, the Apple-only users aren’t especially early adopters, as 32% meet that definition, which is slightly less than the 33% nationwide who also do. There are other characteristics that set them apart.
Windows-only users are the oldest of the major OS family groups, on average 10 years older than every other group. They also include the smallest share of full-time employees, highest share of low-income households, and lowest average number of devices. 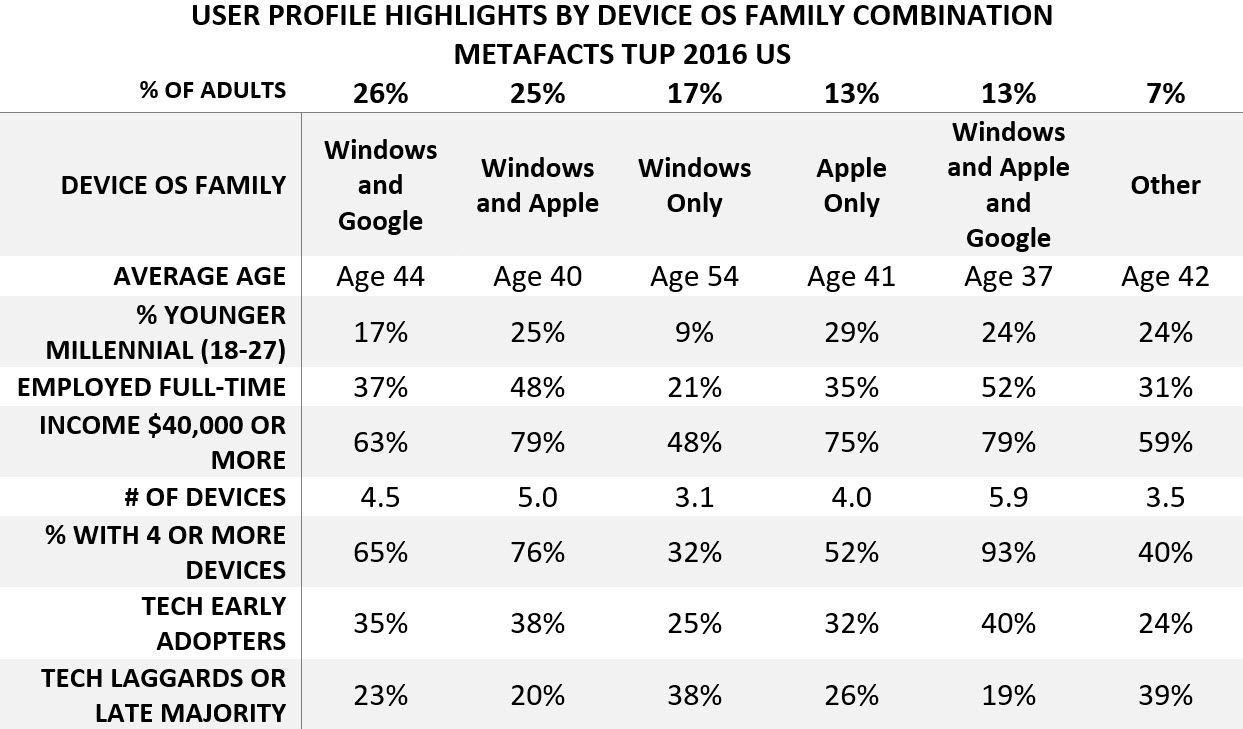 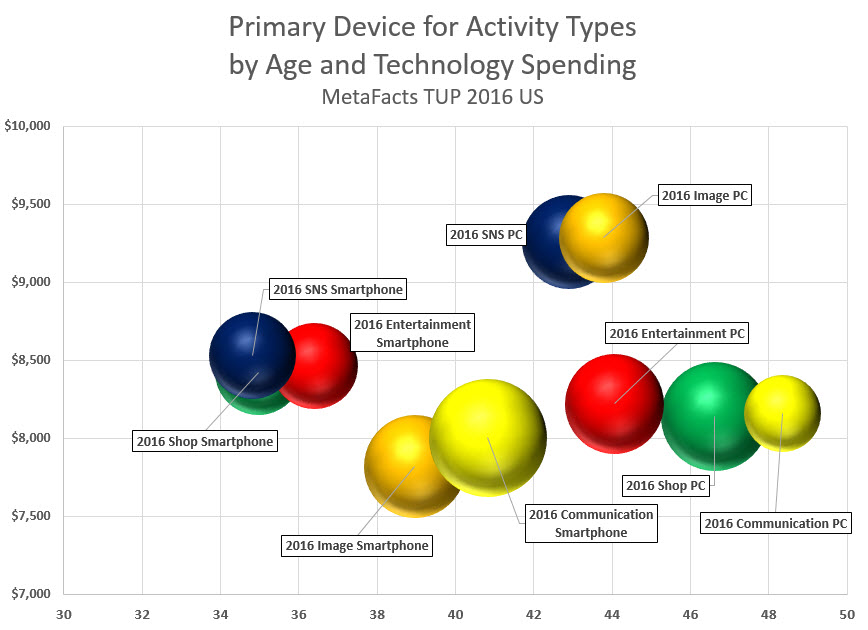 The average age of adults who use a PC for the majority of their image/graphics activities – from managing photos to creating presentations – is 44, nearly five years older than those whose primary image/graphics device is a Smartphone. The graphics PC group also spends more than $1,450 per year more than Smartphone-focused users. Similarly, PC-focused Social Networkers are more than 8 years older and spend $730 more per year on consumer tech devices and services than their Smartphone counterparts.

We expect tablets to continue to languish as a minor device for most users and most activity categories. As more 2-in-1 and convertible notebooks emerge and grow in acceptance, they will continue to relegate tablets to secondary or tertiary use.
Smartphones will continue their market penetration, replacing the basic cell phone among the last stalwart holdouts. Whether the last new Smartphone adopters will choose to go with Android or Apple Smartphones will set them on a course strongly affecting their next PC and tablet purchase. It’s most likely they will choose Google Android since this segment is more price-sensitive and less tech-savvy than average.
PCs will continue their gradual decline from primacy, to be replaced by Smartphones. Within PCs, there will be a broader division between the activity profiles for desktop and mobile PCs. We expect desktop PCs to continue their broad primary and secondary use, due to inertia and the as yet unmatched broad capabilities of PCs. Mobile PCs, however, while pressuring tablets, will themselves feel the strongest pressure from Smartphones as their broad usefulness continues to expand.