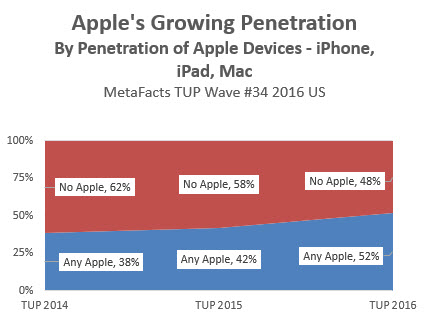 For the first time in tech history, Apple has reached the half-way mark in the active installed base. As of our 2016 wave of the TUP survey, 52% of connected adults are using either an Apple Macintosh, iPhone, or iPad. This overall penetration statistic reflects that at least one key Apple device is in the hands of over half of the market.

Apple’s achievement has been from multiple successes – not only one blockbuster. In fact, just as all boats rise together on the same tide, each of Apple iPad, iPhone, and Macs have attained greater market penetration.

The iPhone has lead the charge, passing one-fourth of U.S. connected adults in 2015 to reach 36% in 2016. The iPad has experienced the most dramatic growth, stretching beyond one in five adults in 2015 to 29% in 2016. Of the three key devices, the Apple Mac and MacBooks are starting to mark their mark beyond their prior return customers. Having been strong among students and mobile employees for some time, especially MacBooks, both Apple notebooks and desktops are reaching a wider audience. 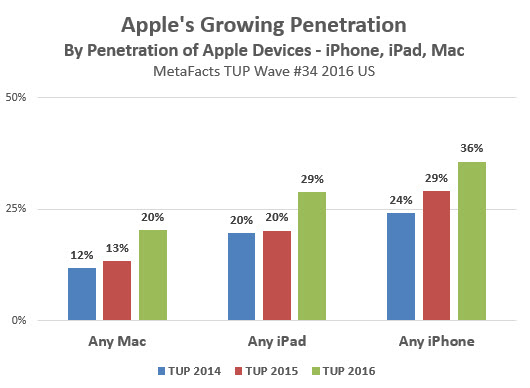 Apple has achieved this in part through balancing proprietary designs with open standards. To encourage and support use by users of only one of Apple’s key devices, each one needs to play well with other competitive products. For example, iPhone and Android Smartphone users need to be able to communicate with each other. Although Apple hasn’t fully opened their iMessage system, basic text messaging works cross-platform. iPad users need to be able to easily browse web pages with as much ease as on a Windows or Android Tablet, even while Apple famously avoided enabling Adobe Flash. Mac users need to be able to share documents with Windows users, and that’s smoother than ever.

Diving into the combinations 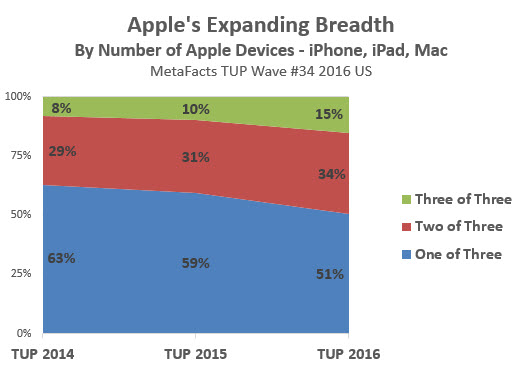 To get a more complete understanding into the dynamics, I dove more deeply into the TUP data. One fruitful dimension of our custom forecasting analysis is based on what users have. For most tech products and service, buyers begin with what they have. The current set of products has a strong impact on shaping future choices. For example, when consumers mull buying a tablet, those already using both an Apple Mac and iPhone are more likely to include an iPad in their consideration set than those with no Apple devices at all. They’re also more likely to have an ongoing connection with Apple, even if it’s limited to periodic operating system updates. Similarly, those with any single Apple device are more likely than non-users to at least consider an additional Apple device. Of course, this isn’t automatically true, since in some cases in can backfire if users are having bad experiences with the product, brand, or in this case, the OS ecosystem.

The largest group based on combinations of Apple devices – those who are only using an iPhone, and not an iPhone or iPad. This group has been largest since 2014. Those who have added an iPad to go along with their iPhone have brought this 2-Apple-device combination to be the 2nd-largest. Perhaps surprisingly, the 3rd-largest Apple-device combination is the set of users who have all three. Although this Apple-intense group only represents 8% of all connected adults, it’s grown from being 4% only one year prior. 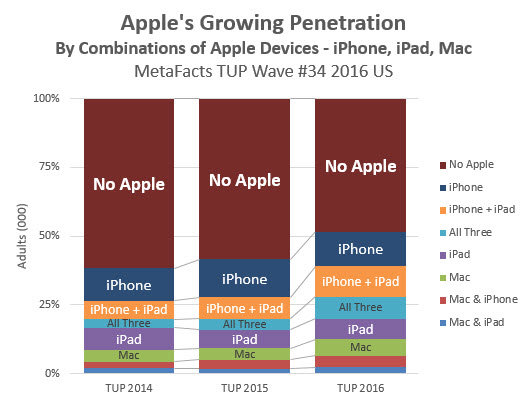 Into the [main] stream
With Apple’s move into the majority, will it be harder for Apple to be perceived as elite, special, and “different”?

Even in the 1980’s when I was researching markets for Apple, the company was different and special. From its beginning, Apple appealed to and reached a small share of the market. There have always been certain segments of the market where Apple has dominated at least some of the time, such as among creatives in graphics, marketing, and education.

We are conducting additional analysis of technology users by their employment role and industry, to see where other TUP results point to strongthening or weakening Apple adoption through buyer’s purchase intentions, refresh rates for PCs (Macs), Smartphones, and Tablets, socioeconomic factors, and many other factors.

Looking ahead
We expect Apple’s expansion to continue, although not with as high growth rates as in the past. In the tablet business, Microsoft’s Surface has made recent inroads, such that 12% of connected adults are using a Windows Tablet. Google Android Tablets are also a strong force, being actively used by 17%.

With the recent refresh of the MacBook line, Apple stands to continue its broadening penetration. The foremost  buyers will come from within the ranks of current MacBook and Apple desktops users. We expect a smaller percentage of buyers to come from the ranks of current Windows Notebook users. Stronger yes will be those users with at least one Mac, iPad, or iPhone.

This trope can finally be truthfully said: these segments are Apple’s low-hanging fruit.