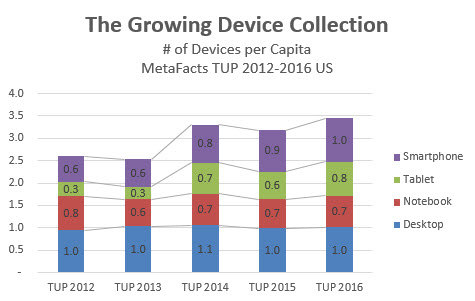 We’re using more of our connected devices, and we’re getting more out of them. Looking deeper, some groups of Americans are expanding their collections while others are contracting.

The growing device number trend goes against one common meme – that “the PC is dead”. On first glance, only viewing the measure of devices per each connected adult, PC usage is flat. That shows that instead of PCs being replaced by Tablets or Smartphones, people are expanding their collections of actively used devices.

There’s also something else going on. This top-line view may appear to show that “everyone” is using more devices, and as I’ll show later, that’s not the case. Some users have a more mobile profile while others are happily sedentary.

Both Desktops and Notebooks are a stable replacement market. Market demand is largely based on replacing older technology.

Tablets, although selling at high volumes in previous years, were in their earliest years isolated to a small niche segment busily replacing one after the other. Some shipments-based analysis missed the fast replacement cycle and misled some early analysts into believing these tablets were all being actively used and thereby increasing the installed base. Only in 2014 did penetration measurably broaden, and more importantly, so did the breadth of their active usage.

Smartphones have been for many years subsidized by carriers and replaced at the end of a subscriber’s contract. However, as subscribers have increasingly moved to contract-free use, we are seeing many replace their smartphones more quickly than others. The overall per capita average has increased as penetration has broadened.

Where the Activities Are 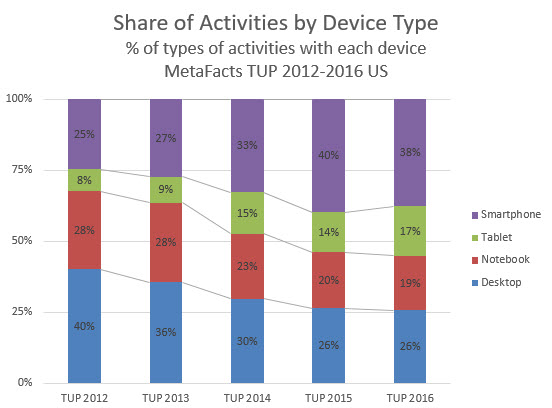 It’s not enough to simply have a device. What matters is whether it is actively used or not. The Smartphone is the most broadly used connected device, being actively used for more types of activities than any other connected device. This has been true since 2014. Tablets are only recently starting to expand their breadth of use in a more serious way, challenging the Notebook’s position as the 2nd-most broadly used device.

This measure is based on the breadth of activities by device type. The MetaFacts TUP survey includes an extensive range of activities, from shopping and entertainment to communication and productivity.

The Shifting Activity Emphasis
Looking more deeply, these two factors taken together tell a similar, although stronger, story. Mobile devices form the bulk of actively used devices. Tablets are increasing in number and usefulness, and based on their penetration and breadth of use, are now on par with notebooks. Desktop PCs continue to be both widely used and broadly useful, so should not be discounted as a powerful and persistent, if withering, force. 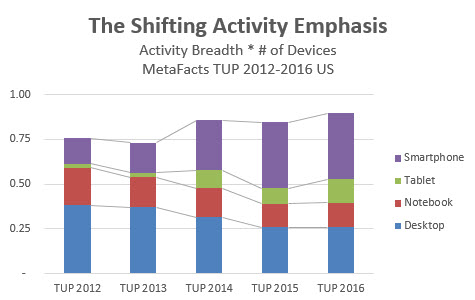 The Preferred Combinations
Looking at per-capita or penetration analysis is a good starting point, and yet obscures some important differences and shifts in the market. Drilling down into the TUP data reveals more important patterns. First, having many devices is popular, not by many but by a large segment. The most-preferred combination of devices involves using four or more devices: two types of PCs: a Desktop and a Notebook, a Tablet, and either a Smartphone or Basic feature phone. This combination is currently used by nearly one-third (31%) of adults.

The second-most popular combination is a PC of any kind and a Smartphone. This represents nearly one-fifth (18%) of users. 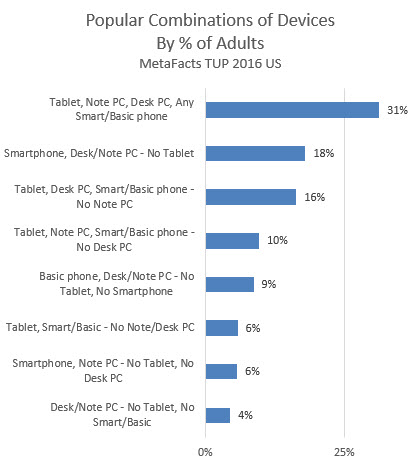 The third-most popular combination is used by nearly as many adults as the previous combination – 16%. This includes a Tablet, a Desktop PC, and either a Smartphone or Basic Feature phone.

One small combination worthy of note is one without a PC. These hardy and creative users have found a way to function with only a Tablet and a mobile phone – either a Smartphone or a Basic feature phone. While this group is very small – at 6% – it bears watching. It represents a possible approach for those wishing to be even more mobile than before. This group had more members a few years ago. In 2013, 11% of adults had this combination, and then migrated to other device combinations. At that time, many were new to technology use and started with this combination and then added a PC. However, this year both Microsoft and Apple have advertised their Tablets as PC replacements, and this group of users now includes those who have answered that call.

Leapfrogging into the Future
When looking into and creating the future, it’s vital to deeply understand the present. Consumers begin where they are. They don’t make choices in a vacuum and instead are strongly impacted by their current product collection. This pattern is a key element in the custom forecasting work we do. 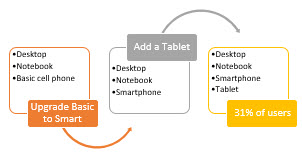 Buyers have a strong disposition to follow a chain of events to get from point A to point B. Their choices are strongly affected by their current devices, ecosystems, activities, and habits. For example, while in 2013 18% of Connected Adults used a basic cell phone, desktop or notebook PC, and no Tablet, this combination dwindled to 9% while many users upgraded from their basic cell phone to using a Smartphone. The combination many moved to – a Smartphone, desktop or notebook, and no Tablet – today includes 18% of adults. 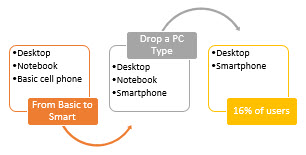 Similarly, the richest collection of devices has grown from being one of the least popular to being the most popular. The previously small group having a Tablet, Notebook, Desktop, and either a Smartphone or basic feature phone grew from 8% in 2013 to be 31% of adults. Many of these previously used everything except a Tablet. 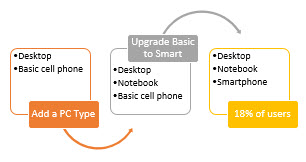 The trend is not as simple as more devices being used. Many users are using fewer devices by choosing to use one type of PC – a desktop or a notebook. This is for many different reasons. While some users prefer the mobility of a notebook, others are moving to a more sedentary profile and eagerly shift to an all-in-one integrated PC design.

Looking ahead, we anticipate a gradual flattening in the overall average number of devices that people use. Desktops and Notebooks taken together will continue to dwindle in activity emphasis with some users preferring one form factor over the other. The growing acceptance of high-end gaming Desktops and Notebooks will boost the venerable PC’s position among the small but growing niche of hard-core PC gamers. The reemergence of highly-affordable and well-configured All-in-One integrated PCs will attract more casual users who otherwise would be complacently comfortable with what they have. Positioning by tablet makers from Apple to Microsoft with boost the broader use of Tablets as PC replacements beyond any gains earned from lengthening user experience.

Some day the device will disappear. It may sound like science fiction. In the not-too-distant future, we’ll see the beginning of the slow death of devices. These will be extensions of products and services such as today’s Amazon Echo or Dot. A person’s voice, face, or token will establish identity and allow them to use any of a wide range of microphones or cameras throughout their homes, cars, workplaces, or public places. With these connected to a high-speed network, extensive computing power needn’t be local. For this to happen in any sizable way, beyond technical hurdles there are still many factors to be addressed, from privacy and security to how information will be displayed or spoken in a useful way. The Echo’s current penetration below 2% is only the first step in a very long journey.

Well before a deviceless future comes about, though, consumers will continue to get more our of their devices. They will continue their momentum of broadening their activities with each of their many devices, regardless of size or shape.