Google Android and Chrome OS Tablets and Smartphones have taken the world by storm, and yet aren’t for everybody.

Five US states have the lowest use of any Google Android/Chrome OS device: Ohio, California, Illinois, Pennsylvania, and New Jersey. Nearly one in six (65%) of Connected Adults in New Jersey do not have an Android or Chrome OS Tablet, Smartphone or Chromebook. Fifth-ranked California has 58% of its Connected Adults not using any. 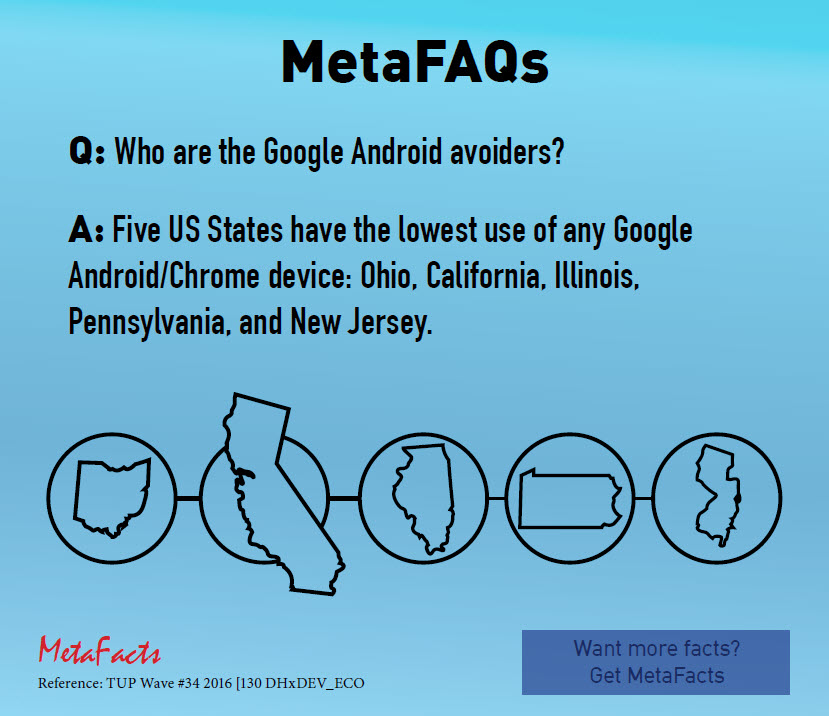 In the classical analysis of technology adoption, there are innovators, early adopters and laggards. Although often ignored or derided, there are also avoiders. These are the people who go out of their way to not use something. Although some tech forecasters may assume that eventually 100% of the population will use a given product or service, that’s hardly ever the case.

In the case of Google-avoiders, not all of these are avoiding Smartphones or Tablets. In our TUP 2016 survey, we found that a substantial number of Google-Avoiders use a Tablet or Smartphone running Windows or Apple iOS.

Many other related answers are part of the full TUP service, available to paid subscribers. The TUP chapter with the most information about Google-avoiders, Apple-avoiders, and Windows-avoiders across all devices and platforms is the TUP 2016 Devices Chapter, and within that chapter, the Device OS Ecosystems section.