Girls are gamers, too, although not everywhere (MetaFAQs)

There’s a rampant rumor that girls aren’t gamers. This has not been true for many years, and yet the idea seems to persist.

One reason is partly related to another stereotype which has some truth in this case: “The only difference between men and boys is the price of their toys”.

By far, males are the major users for gaming desktops and gaming notebooks, using them at twice and three times the rate of females. 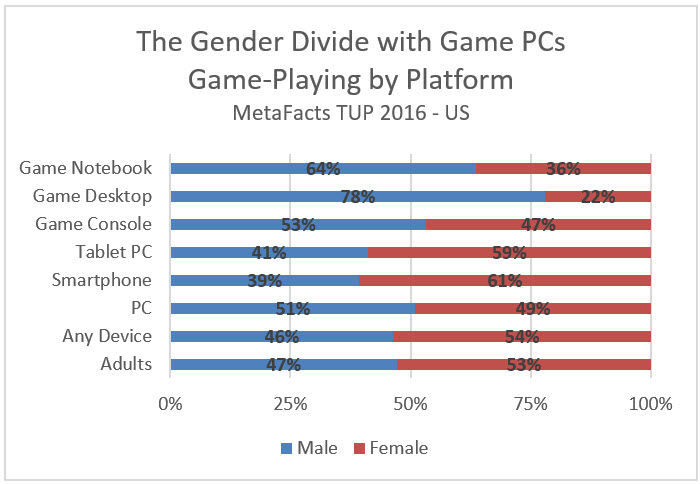 These tricked-out, souped-up, and (sometimes) overclocked PCs are created to offer superior gaming experiences. Some are also designed to allow game enthusiasts to get under the hood and further extend the capabilities.

Females outnumber males for regular game-playing on Smartphones and Tablets, and by a wide margin. Sixty-one percent of active Smartphone gamers are female and 59% of Tablet PC gamers. This is based on our most recent research among 7,336 US adults as part of the Technology User Profile (TUP) 2016 survey.

Gaming PC makers HP, ASUS, Acer and Dell/Alienware have a challenge ahead to win over the hearts and minds of female gamers. These are an important segment to attract, too. Not only are they active game players across many platforms, they also spend substantially on tech products and services of all kinds.

This MetaFAQs research result addresses one of the many questions profiling active game-players.

Many other related answers are part of the full TUP service, available to paid subscribers. The TUP chapter with the most information about game players across all devices and platforms is the TUP 2016 Game Consoles, Gaming PCs and Game-Playing Chapter.

Comments Off on Girls are gamers, too, although not everywhere (MetaFAQs)