This week, Facebook announced their plans to defeat Ad Blocking software for its members using Desktops.

Users vote with their fingertips and clicks, and may allow themselves to be herded towards Facebook’s more-lucrative Smartphone platform, will tolerate more ads they’ve actively chosen to avoid, will migrate to other Social Networks, or may simply lose interest and wither away. 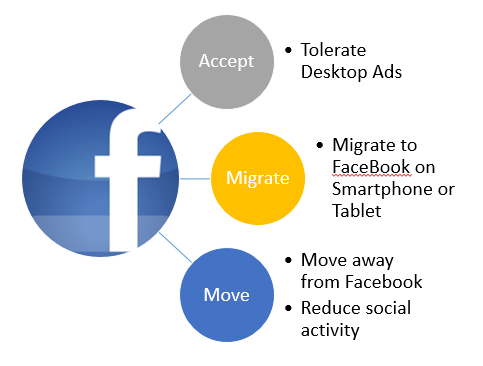 Is Facebook’s gamble really going to affect much of a market? How many Facebook users still use their desktops? How attractive are these users? There’s more to these users than many people might think.

Furthermore, Facebook users who use their Desktop PCs spend more on technology products and service than the average American Connected Adult, 5% more, which is slightly higher than the 4% more than those users preferring Smartphones for Social Networking.

Ad Blocking is a controversial topic among users, the media, and advertisers. As we reported earlier in our TUPdate Look Who’s Using Adblockers , users with ad blocking software are an attractive market segment, spending more on technology than those who don’t.

As part of Facebook’s move, they offer users the option to customize their ad preferences. Although this may encourage users to further control their experience, we expect that convenience-oriented users will choose other options first.

At the end of the day, users make their choices. Without engaged active users, no social network is going to continue. Although many media outlets and advertisers will rally around Facebook or anyone willing to take on ad blocking technology or user’s resistance to advertising, it is a calculated gamble. Facebook may win more advertisers and allies, may alienate a substantial number of their users, or may help bring around consumer sentiment to accept more advertising.

This TUPdate includes a complimentary brief summary from a special MetaFacts Profile report – Look Who’s Using AdBlockers – a Profile of Technology Users throughout the US, UK, France, Brazil, and China. The results are based on a multi-country survey of over 10,000 representative respondents conducted by MetaFacts. The report spans 125 pages including supporting tables, and is available for license. Current TUP subscribers can obtain the report and supporting datasets at a substantial discount. To license the full report, contact MetaFacts.