Cloud-based home security and energy management are on the cusp of either fizzling as a fad or expanding to a wider market, based on our recent MetaFacts market research. Also, the pattern consumers are exhibiting spells niche status for the Apple Watch, iPod and Chromebook.

In our analysis of a broad range of consumers spanning five countries, we separated the most forward-learning from the backward-learning, as one of our methods to predict the future of technology products and services. The most adventurous consumers point the way for the rest of the market, with their willingness to try the newest technology.

While Apple can justly lay claim to the Forward-Leaning for favoring many of their products. For example, iPhone and MacBooks are strongest among both the first and second tier of Forward-Leaning consumers. In contrast, many other products have lingered and languished among the forward-learning. Unless accepted by the next tier of consumers, a replacement market is the best hope for advanced tech products.

The Forward-Leaning are the segments of the market which use or have awareness of the newest-technology products and services, and stand out from the majority and Backward-Leaning in their distinct tech adoption, usage, and attitudinal patterns.

To identify consumers in the marketplace who are Forward-Leaning, Backward-Leaning, or between, we conducted advanced statistical analysis on results from our most recent MetaFacts Technology User Profile survey. We identified a wide number of behaviors and attitudes which we hypothesized would be leading-edge or lagging-edge, and then tested these for coherence and lift.

The elements we tested were based on user’s actions, preferences, and awareness. For example, we included factors such as how much they would love to be the first with Wearable Technology, and how aware they were of their ability to print directly from their tablet or smartphone. Also included was their interest in near-term technology products and services such as smartwatches. We tested their usage of newer tech products as well as the overall freshness of their actively-used tech products.

Through our analysis, we identified four distinct segments, arrayed in quartiles from the most Forward-Leaning to the most Backward-Leaning. As a measure of the goodness of fit, 79% of the components we identified collectively explained the variance.

What the Forward-Leaning Use Today 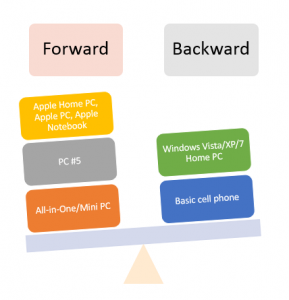 Meanwhile, the Backward-Leaning stand out in part due to their current use of PCs with older operating systems: Windows XP, Windows Vista, or Windows 7. Also, they’re distinguished, if dubiously, by their active use of a Basic cell phone.

How the Forward-Leaning Use Technology

In fact, for five of the six broad categories of activities we tracked, the Forward-Leaning are unique in using an All-in-One/Mini Desktop as their primary device. The Backward-Leaning, meanwhile, stand out in using a different combination of devices for their activities, from Basic Cell Phones to Tower Desktops and Game Consoles.

This is not to say that the Forward-Leaning only use All-in-One/Mini Desktop PCs. In fact, they use many devices – more than the average connected adult. This measure reflects that they are have relatively higher shares that primarily use each particular device for the activity type.

There are some regional differences. Among the Forward-Leaning, the US the e-Book Reader is uniquely stronger for more than a few activity types, namely Entertainment (reading books and magazines), Information/Search, and Graphics/Imaging (sharing photos). This is due in large part to Amazon’s and BN’s grip in the US on the published media market and subsidization of e-Book Readers (with Kindles and Nooks). In the US and the UK, the Backward-Leaning more strongly use a Tower Desktop PC for most activities, while in France, Brazil and China, the Notebook dominates.

Purchase Plans – Facing Toward the Future

To further predict and understand the future, we analyzed what the Forward-Leaning plan to purchase in the coming year.

Purchase plans further identify which tech products are on the cusp to be either breakthrough or fads. When the strongest interest is only among the Forward-Leaning, it either means these Early Adopters know something the rest of us don’t know, or are simply going to be pioneers that end up trying something that has little or no interest among other market segments. Until the second tier of users express any interest or awareness, these products will either fade away like so many other fads, or will be relegated to the niche-basket of tech history. 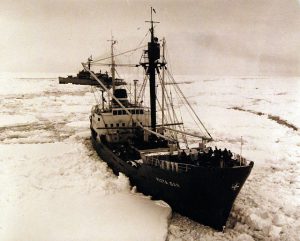 Fads or Breakthroughs
At present, cloud-based consumer services such as the remote monitoring and management of home energy or security are only on the minds of the Forward-Leaning. While Smartwatches from Apple and others have captured the interest of the Forward-Leaning and the next tier, Google Android Wear Smartwatches have not. Furthermore, computing devices which rely on wireless Internet connectivity for full functionality haven’t sparked the interest of the next tier. The many historical attempts from thin clients and netbooks continue through the present day. Even while wireless networks are faster and fatter than in the past, many consumers are held back by access costs, coverage gaps, underpowered offerings, and everyday user inertia. 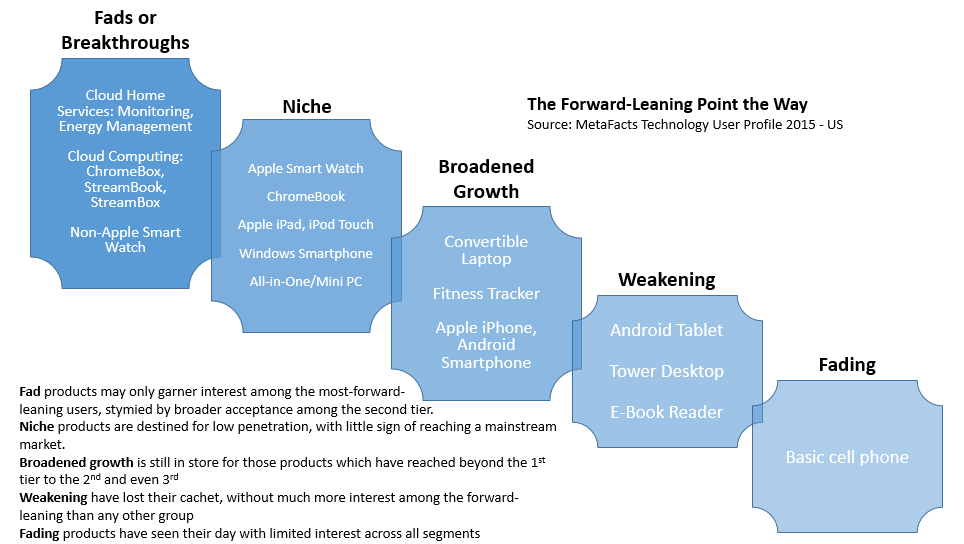 Niche
Niche products are destined to be only in the hands (or on the arms) of a few. Apple’s Watch is shaping up to be niche product, with only the Forward-Leaning expressing measurable interest. Chromebooks, although also likely to stay in a niche, have reached wider interest than other cloud-connected computing devices, due in part to the Android ecosystem connection.

Among the niche products which may be transitioning towards the mainstream are Mini Desktop PCs and Windows Smartphones.

Broadened Growth
Several tech products which appear headed for broadened growth include the Apple iPhone and Android Smartphones. Although widely used, these Smartphones are continuing to expand into the hands of the majority and Backward-Leaning.

Fitness trackers, unlike smartwatches, are also poised for wider use. These lower-priced and narrow-function devices have resonated with a broad range of sensibilities to attract well beyond the earliest and the fittest.

Also, Convertible Laptops, which offer to give the best of both notebook and tablet worlds, are headed beyond the hands and fingers of the first few.

Weakening
The now-venerable Tower Desktop PCs, Android Tablets, and e-Book Readers such as the Kindle are on a withering trajectory. Having reached acceptance across a full spectrum of users, their purchase plans have diminished to replacement levels, or have been overtaken by competitive offerings.

Fading
Last, and least, is the Basic cell phone, also called a feature phone or, sometimes, a dumbphone. The most Backward-Leaning among each country continue to hold on to these devices. These users can be given some credit for ingenuity in that many are continuing to use them for a number of different activities beyond simple voice phone calls. The most innovative among the Backward-Leaning are text messaging, a longtime staple of the Forward-Leaning. Still, when taking these same user’s purchase plans into account, new Basic cell phones have seen their day. 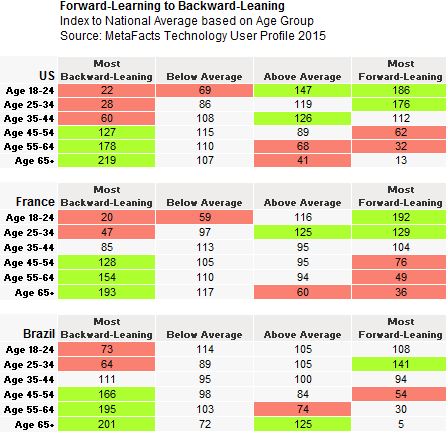 In Brazil, there’s a somewhat similar pattern, although the socioeconomic status of 18-24 Brazilians, especially females, thwarts their ability to be among the most Forward-Leaning Tech consumers.

Here’s a little inside secret – MetaFacts predicts the future and yet doesn’t.

What we actually do is listen very carefully to what’s already happening, and use the science of statistics and art of experience to make our predictions. Actual users predict the future – with their actions and attitudes. By carefully gathering thousands of carefully-selected survey responses, we study who is and isn’t using which technology products and services. We analyze who wants and doesn’t want to use the newest technology.

Through 35+ years of tracking the tech industry we’ve found a complex and shifting combination of factors which supports forecasts. For many types of tech products and services, there are some truisms. For example, a user’s current behavior weighs heavily in influencing their near-term and long-term adoption profile. While the focus of any given disruptive technology is to break users out of their habitual inertia, one persistent truth is that most new technology adoptions are lateral. Users shift to newer technology to fill the same core needs they’re filling with older, less-effective technology. Habits die hard: behavior-changing happens slower than device-changing. Users continue doing what they’ve been doing long after they’ve adopted different tech products or services.

This TUPdate includes a complimentary brief summary from the Technology User Profile survey of adults throughout the US, UK, France, Brazil, and China. The results are based on a multi-country survey of over 10,000 representative respondents conducted by MetaFacts. Current TUP subscribers can obtain additional analysis and supporting datasets at a substantial discount. To license the full market research results, contact MetaFacts.