Apple’s Girds Up Its Legs With Handoff

A table is more stable when each leg is strong and when each leg supports the others. In Apple’s most recent operating system upgrade, the Handoff feature stands to capitalize on Apple’s strengths, to stem defections, and possibly to attract new customers.

Apple gets it – to focus on technology users and what users do – and not only on the devices themselves. By making the interaction between key devices fluid, users will be more likely to choose future devices which interoperate instead of buying separate islands. 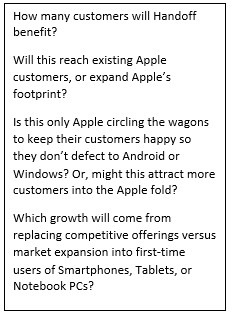 Also, while many companies have tried to reduce customer defection by effectively padlocking the exit doors, even skirting consumer protection laws and the ire of the FTC, it’s more positive long-term to provide customers reasons to stay. While many customers recognize their choices will restrict them to a walled garden, they may choose to stay longer provided the fruits are as promised.

Many users are juggling multiple products. Over half – 55% – of Connected Adults actively use four or more devices. This spans PCs, Tablets, Smarpthones, e-Book Readers, and other Connected Devices. Any moves to integrate the user’s experience in a more seamless way will increase the chances that users will choose to stay within a given ecosystem, such as Apple’s.

Handoff promises to let users smoothly juggle their Apple devices in the middle of an activity. For example, when a call or message arrives on a user’s iPhone, they can choose to take the call on their nearby iPad or Mac.

At the current time, 38% of Connected Adults have at least one of the three key Apple devices: an iPhone, iPad, or Mac. However, Apple has a cliff to climb, since 63% of these Apple customers use only one type of these devices. 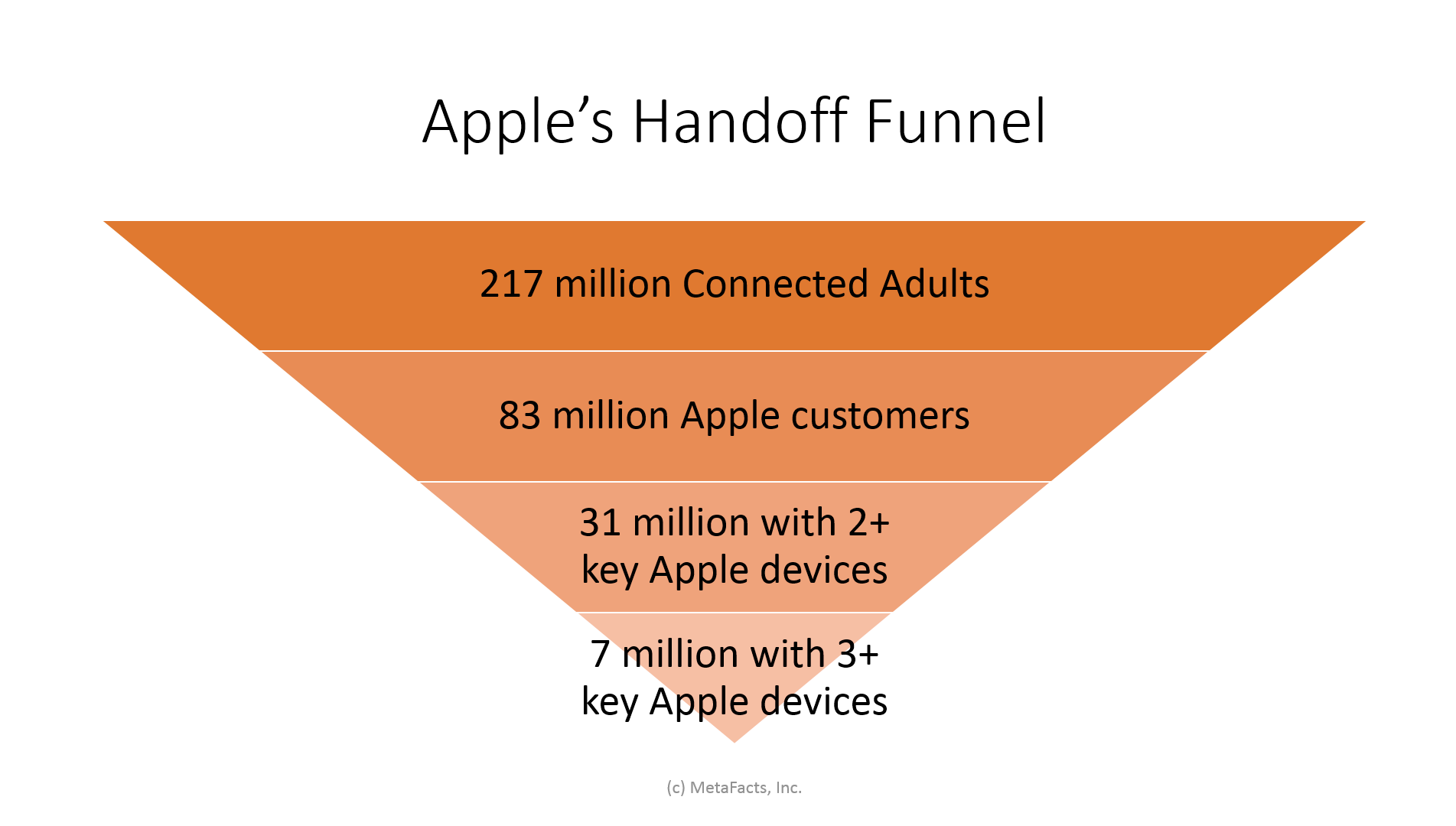 So, at most, today only 37% of Apple’s customers can benefit from Handoff features because they have at least two of the three Apple devices. The actual number is smaller since the Handoff’s full capability will only be available to those with devices which can run the most current operating system.

Apple’s footprint is split by iPhone users and iPad users, at 24% and 20% of Connected Adults, respectively. These two groups overlap minimally. Only 26% of Apple’s customers use both an iPhone and iPad.

While Microsoft, Google, and the affected competitors could collaborate a coordinated response with their own responses, this will require substantial technical and business cooperation. Continuity capabilities will most likely first come from individual apps. For example, communication apps such as Viber have already extended their capabilities to simultaneously continue conversations across multiple platforms. 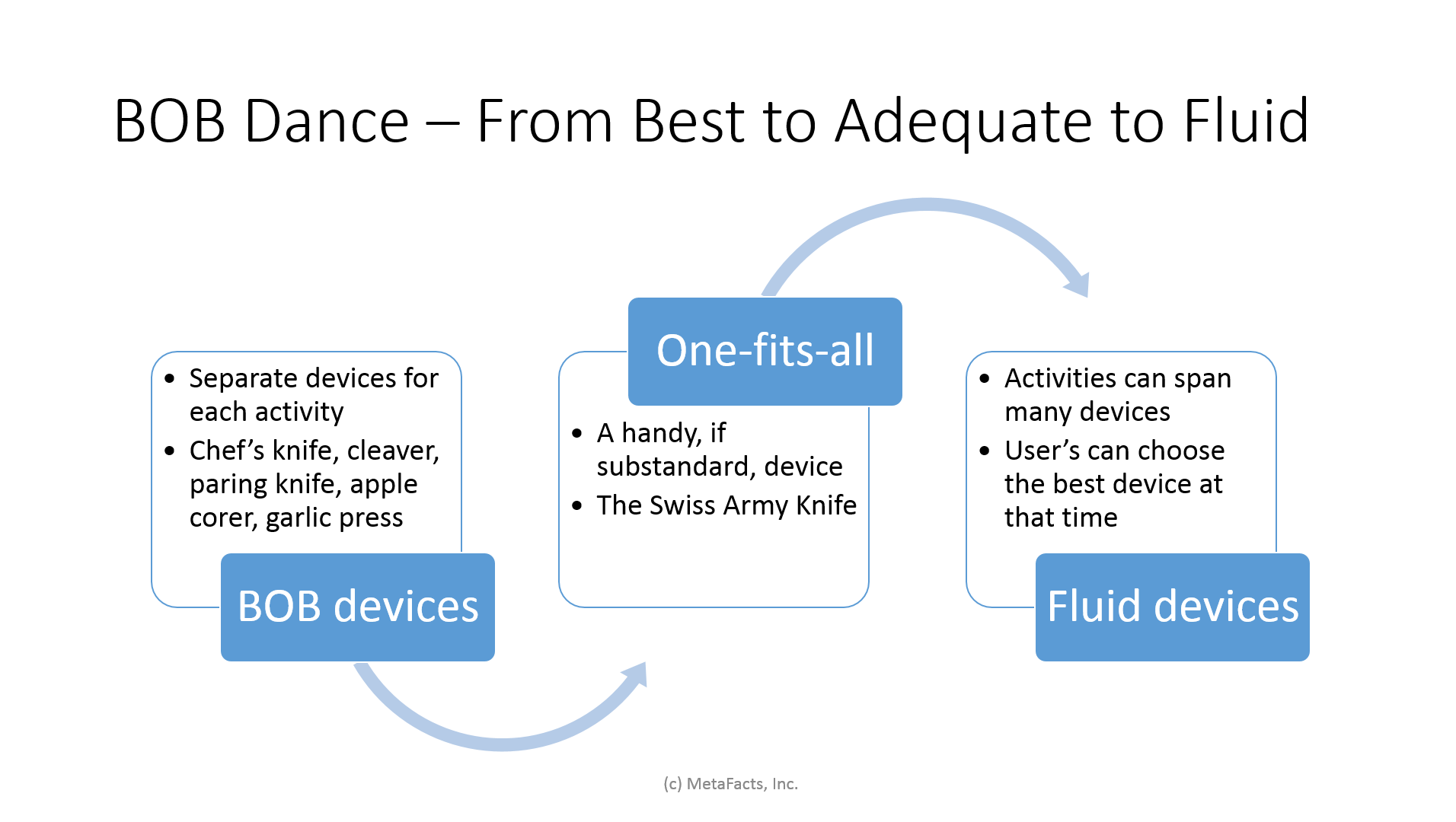 Consumers have proven they are willing to juggling multiple devices. In doing what MetaFacts calls the BOB Dance, they will choose the devices which are best-suited to a particular tasks, the Best Of Breed (BOB). Then, over time, they opt towards fewer devices and accepting a one-fits-all approach even if the experience is substandard. Witness the death of the everyday digital camera, quickly replaced by Smartphones well before image quality met that of inexpensive cameras.

More-encompassing approaches such as the integration promised by Apple Handoff may herald the era of Fluid Devices, where the user can smoothly and flexibly choose to use their “best” device at the moment that best suits them.

The consumer’s perennial focus on convenience means that Apple’s Handoff capabilities will strengthen loyalty among the Apple-faithful and will slowly increase their footprint among those with at least one Apple device. More importantly to Apple, the heightened conveniences will help delay loss of Apple customers to the Google or Microsoft world.

These results are based on the most recent wave of Technology User Profile, the TUP 2014 edition. The large-scale survey is in its 32nd continuous year, documenting and detailing the full scope of technology adoption and use. In addition to detailing the many devices adults use to connect and sizing targeted market segments, the survey-based research details what people do with their devices. It reports which activities adults primarily use with which device. For example, TUP reports which market segments use their Smartphones or Desktops as their primary communication device, as well as which devices are primarily for entertainment, shopping, social networking, and other types of activities.

Further results and datasets are available to TUP subscribers, including the full details on these technology users: which devices they intend to buy, which other devices they already actively use, the activities they’re doing and which device they do them with, their complete demographic profile, their tech spending, wearable technology, and more.
Technology companies who want to know more about retail or online shoppers, Smartphone users, or about their current or future customers can contact MetaFacts to learn how to subscribe to the rich resources of Technology User Profile.