There always has to be someone who’s first, and a first time for everything. Early Adopters are a substantial force in technology adoption, and the starting point continues to get younger.

Think back to the first time you used a Personal Computer or a Mobile Phone. Were you the first on your block, in your class, or where you work? If so, then maybe you are in that earliest 2.5% called Innovators. That’s one step ahead of Early Adopters, who are in the first one-sixth of users of any given product.

If you’re Generation X, age 31-46, and you first used a PC when you were 11 or younger, you were ahead of 84% of others your age. Yes, you’re a PC Early Adopter in your age group. On the other hand, if you only started using a PC at age 29 or older, then you’re in the adoption segment named PC Laggards. (Don’t take it personally; it’s a widely used term and someone has to be last.) 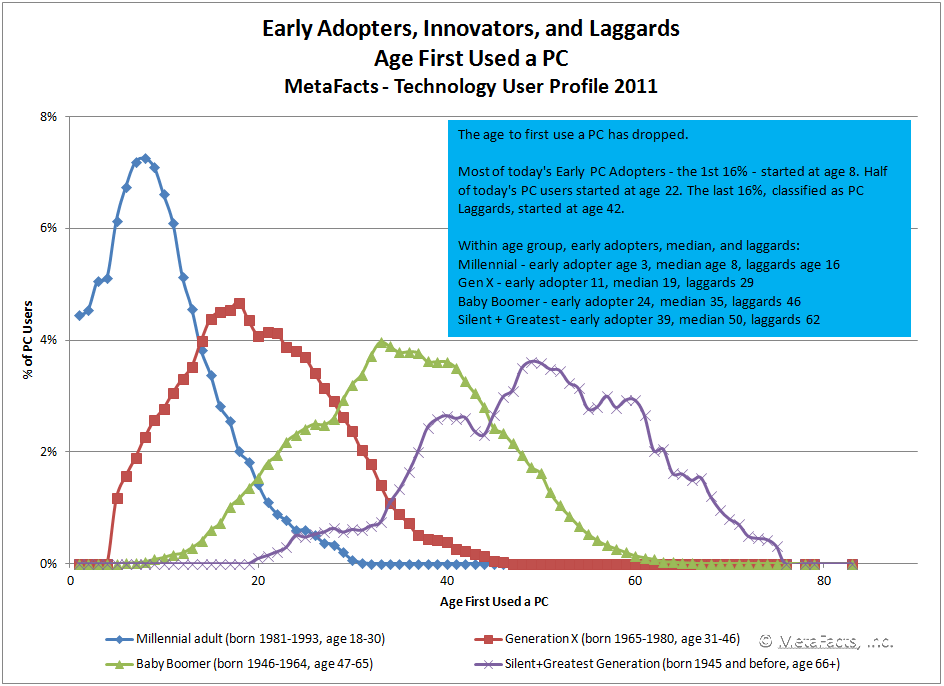 Why does this matter?

Simply put, Early Adopters behave and think differently than the Early Majority, as with the Late Majority compared with Laggards.

PC Early Adopters crave details and innovation while PC Laggards feel overwhelmed. Laggards generally have lower socioeconomic status. PC Early Adopters use more PCs and other devices, and are also earlier adopters of Mobile Phones, eReaders, MP3 Players, and a host of other devices and services. Laggards have a simpler technology footprint.

Early Adopters also choose different brands than the majority or Laggards. PC Clones, shunned by Laggards, rank relatively highest among Early Adopters, as do Apple and IBM/Lenovo brands. PC Laggards, on the other hand, have a higher rate of choosing Acer and e-Machines PCs.

PC Laggards shop for home PCs at Wal-Mart, Target, or eBay, while the Early Adopters who aren’t assembling their own PCs shop more often at company stores such as Sony Universe or Apple retail.

Mobile Phone Early Adopters have a higher share of subscribers who frequent LinkedIn, MySpace, and Google+ than Laggards do. Communication is big; more Early Adopters tend to use VoIP services like Skype for domestic and international calls than Mobile Phone Laggards.

This is not to say that Early Adopters are good and Laggards are bad; simply that they are different. This has implications for forecasters and marketers alike, as it provides a fuller understanding of the adoption potential of other technology products and services. 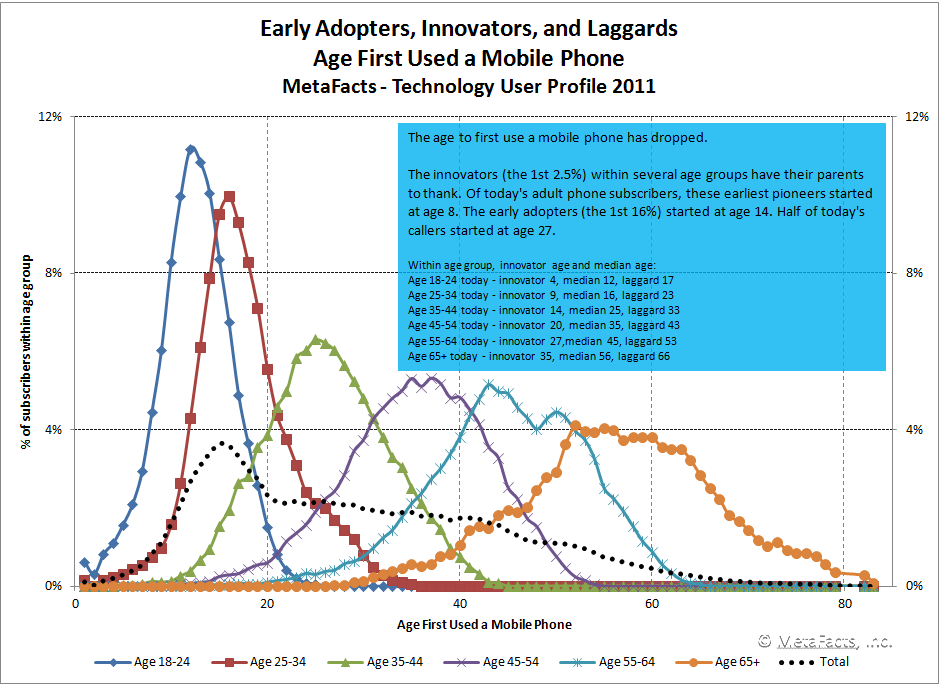 Using Technology User Profile, both the current wave and its previous 28 years, MetaFacts analyzes market adoption in many different ways. The age-banded approach analyzed here gives a high degree of explanatory power to how some market segments adopt technology much differently than others. We find that age alone does not predict market acceptance. In other words, it’s being young doesn’t mean you’re automatically an Early Adopter.

While there is a certain trickle-down folklore which favors the “latest and greatest” products and features as driving adoption across all tech products, realistically, this technocentrism has not been borne out. In fact, focusing what people feel and do, and not on technology alone, gives a more solid foundation towards understanding, predicting, and creating the future. After all, people adopt technology, not the other way around.

The information in this MetaFacts TUPdate is based on the Technology User Profile service.

For this TUPdate, MetaFacts used two factors defining Adoption Stage: PC Adoption and Mobile Phone Adoption. In both cases, this is a straightforward measure of adoption based on the year they first used the product. Adoption stage was determined based on the respondent’s adoption age within each respondent’s discrete age relative to all other respondents of the same age.

To see other research coverage of Internet products and activities  – from smartphones to feature phones, desktops to notebooks, social networking, demographics, and attitudes – see the many other questions TUP answers on www.technologyuser.com. Tech market research professionals can license direct access to TUP.

Contact MetaFacts to access the MetaFacts Technology User Profile Overview Edition report, which covers the broader range of key trends. View findings in 25 pages of executive summary analysis, 200+ pages of charts and graphs, all supported by 95+ pages of detailed tables. The complete, 300+ page report is delivered to you electronically.

MetaFacts releases ongoing syndicated original research on the market shifts, trends and consumer profiles for Smartphones, Netbooks, Mobile PCs, Workplace PCs, Home PCs, Web Creators, Broadband, and many other technology products and services. These TUPdates are short analytical articles in a series of specific topics utilizing the Technology User Profile Annual Edition study, which reveals the changing patterns of technology adoption around the world. Interested technology professionals can sign up at http://technologyuser.com/contact/ for complimentary TUPdates – periodic snapshots of technology markets.

MetaFacts helps technology marketers find and measure their best and future customers. MetaFacts’ Technology User Profile (TUP) survey is the longest-running, large-scale comprehensive study of its kind, conducted continuously since 1983, the year before Apple released the Apple Macintosh. The detailed results are a primary market sizing and segmentation resource for leading companies providing consumer-oriented technology products and services, such as PCs, printers, Smartphones, consumer electronics, mobile computing, and related services and products. TUP analyzes key trends and the data-rich source can be dived into more deeply for custom analysis. For more information about the syndicated research service, analysis tools, publications and datasets, contact MetaFacts at 1-760-635-4300.