How much does a weak AT&T signal affect how its subscribers use their smartphones? Now that Apple’s iPhone is officially being launched on Verizon’s network, will disgruntled subscribers simply jump carriers? Also, how large is the gap between this perception of AT&T’s network and Verizon’s?

There has been a lot of press about AT&T’s smartphone subscribers not getting the signal they want when they want it, particularly for its Apple iPhone users.

Based on our most recent wave of Technology User Profile (TUP) surveys, there is a relationship between how well subscribers perceive they are getting signal and how fully they use their smartphones.

Just under half (49%) of light-usage AT&T smartphone subscribers agree or strongly agree with the statement “My mobile phone is able to get signal any time so I can use it anywhere.” These light-usage Smartphone subscribers use their Smartphone more like a Basic Mobile Phone, with a below–average number of activities, focusing on core activities such as phone calls and text messages.

By comparison, 61% of heavy-usage AT&T Smartphone subscribers agree or strongly agree they can get signal when & where they want. The enjoy their Smartphones for a much richer range of activities, including downloading paid apps at 36 times the rate of light users. Other activities enjoyed by more than 30% of smartphone users and much more often by heavy-usage smartphone users are managing tasks (20x), watching movies (19x), keeping a calendar (12x), and checking sports, news, movie times, and weather (9x). In essence, when smartphone users can’t connect, they can’t fully enjoy what a smartphone can and will do for them. 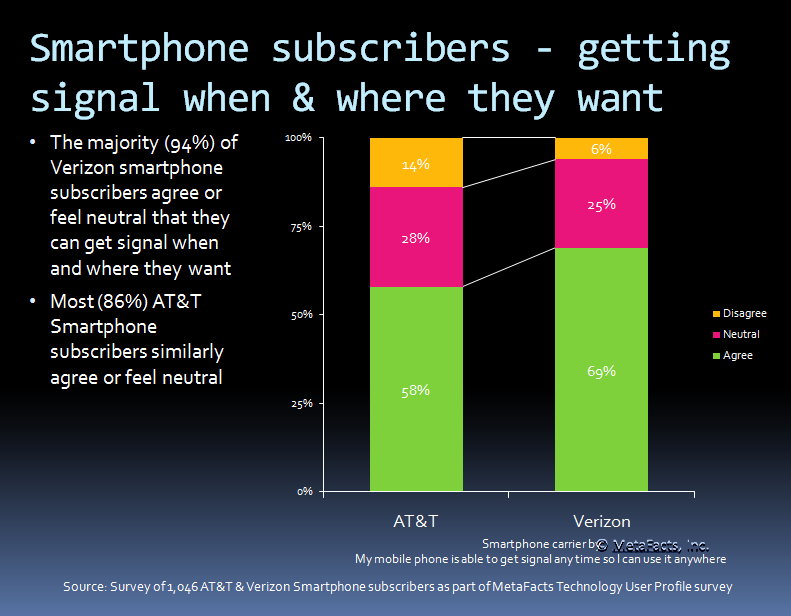 Will Verizon be that different?

This signal perception gap is not wide enough by itself to fully sway subscriber’s future choices. While it will continue to get a lot of press, other issues may not get as much attention, yet may have stronger damping effects.

Dissatisfied Smartphone subscribers may simply move to a Basic Mobile Phone. The idea of moving to a mobile phone that’s not sexy or advanced may seem like heresy, particularly within some parts of tech media. Reliability and simplicity appear to be growing in their importance as key buying factors. After all is said and done, subscribers do want to actually use what they’re carrying and paying for.

Furthermore, most buyers of new technology don’t often like to admit their frustrations and difficulties. There’s a personal identification with products like Smartphones, particularly among the least-technical earliest adopters. In other research MetaFacts has publicly released, we’ve identified a strong market for prepaid wireless and for the use of Basic Mobile Phones, and not only among the unemployed or socioeconomically disadvantaged.

Although Smartphones and signal issue get a lot of attention, consumers prove repeatedly that their choices, and subsequently the marketplace, is more complex than on first look. 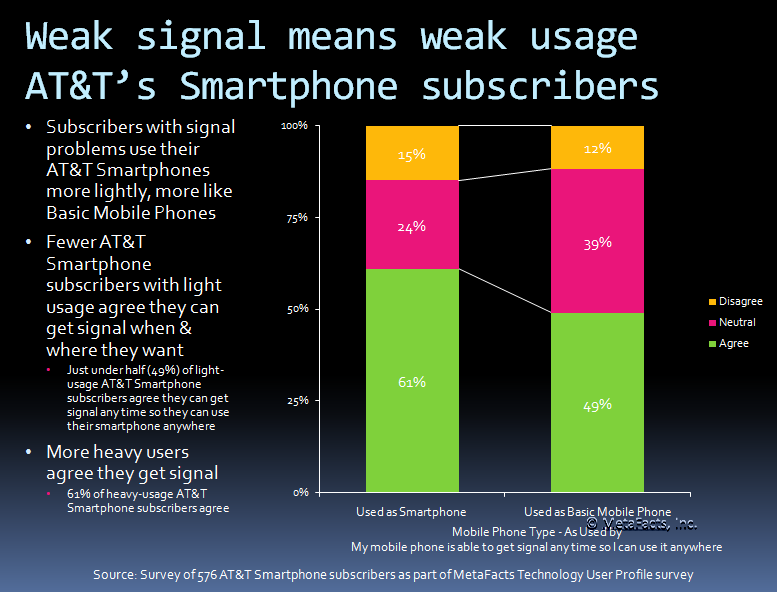 MetaFacts Technology User Profile Overview Edition – report available by contacting MetaFacts. View findings in 25 pages of executive summary analysis, 200+ pages of charts and graphs, all supported by 95+ pages of detailed tables. The complete, 300+ page report is delivered to you electronically. This edition is for the U.S. based on the 2010 wave of Technology User Profile gathered among a scrupulously selected set of representative respondents, surveyed both online and offline.

To see other research coverage of communication products and activities – from smartphones to feature phones, desktops to notebooks, social networking, chat, and webcams – see the other communication-oriented questions TUP covers on www.technologyuser.com.